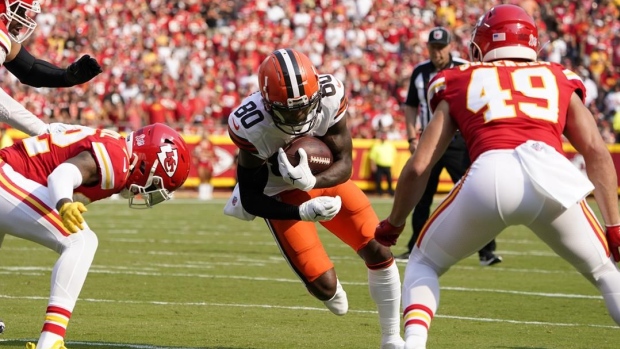 A model of consistency and durability in his NFL career, Landry got hurt after catching a short pass and picking up 9 yards on the second play from scrimmage in Sunday's 31-21 win over the Houston Texans.

On Monday, coach Kevin Stefanski said Landry was “week to week” and that it was still not clear whether Landry would go on IR.

The 28-year-old Landry must sit out the next three games, and it's possible he could be out longer depending on the severity of his sprained medial collateral ligament.

Landry has never missed a game in his career because of injury. He was forced to sit out once last year because of COVID-19 contact tracing protocols.

Because of his injury, the five-time Pro Bowler's streak of catching at least two passes ended at 111 straight games — the fourth-longest streak in history. Landry has six receptions for 80 yards and two rushes for 13 yards and a touchdown in 2021.

Landry is one of Cleveland's team leaders, and his absence will be felt on and off the field.

While Landry won't be available, the Browns could get back star receiver Odell Beckham Jr. this week when they host the Chicago Bears. Beckham hasn't played since injuring his knee on Oct. 25 and undergoing season-ending surgery.

Beckham has been inactive for Cleveland's first two games, but signs are pointing to him making his season debut this week.