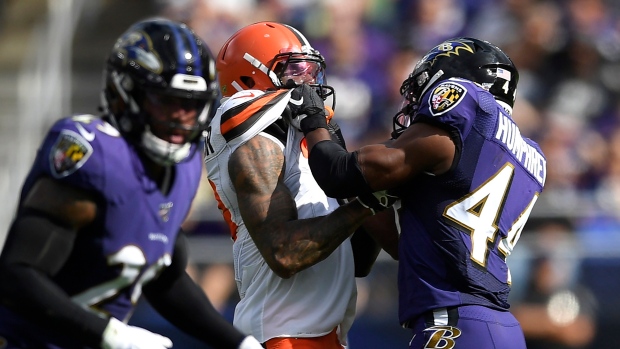 Beckham and Humphrey were flagged after they tangled in the third quarter of Cleveland's 40-25 win. Humphrey, who played Beckham aggressively the entire game, was also assessed the same $14,037 penalty.

The league decided not to levy fines for fighting on the both players. First-time offenders are fined $35,096, according to the league's fine schedule.

Humphrey and Beckham began shoving on a running play before grabbing each other's face masks and going to the ground. Humphrey pinned the Browns wide receiver and appeared to choke him before being pulled off.

On Friday, Beckham said he will appeal the fine. He'd been fined previously for a fight with former Carolina cornerback Josh Norman and could have been fined up to $100,000 for a second offence.

Beckham was not fined for any uniform violations. He criticized the league's arbitrary handling of what he believes are inconsequential wrongdoings.