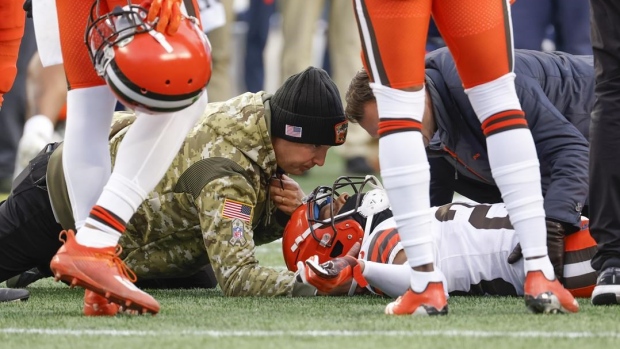 CLEVELAND (AP) — Cleveland Browns cornerback Troy Hill was released from a Boston-area hospital after being treated for a neck sprain suffered in Sunday's 45-7 loss to the New England Patriots.

A team spokesman said Hill is traveling back to Cleveland on Monday following the scary moment in the closing minutes of the blowout loss.

Hill was injured while trying to tackle Patriots wide receiver Jakobi Meyers, who broke away and scored an 11-yard touchdown with 4:13 left. Hill's facemask was removed from his helmet, he was immobilized and carried off the field on a backboard before being taken to a hospital.

The Browns said he always had movement in his extremities.

“I don’t know what exactly happened, but any time you get carted off on a stretcher, you just want to keep that guy in your prayers,” said safety John Johnson III, who played with Hill in Los Angeles before signing with Cleveland during the offseason. "He’s a great player, a great teammate, so I just hope he gets better.”

The 30-year-old Hill, who is from Youngstown, has been one of the few bright spots on Cleveland's inconsistent defense. He had two sacks in the Browns' 41-16 win over Cincinnati on Nov. 7.

Hill's injury was one of several for the Browns. Cornerback A.J. Green and wide receiver Anthony Schwartz both left the game with concussions.

Also, quarterback Baker Mayfield bruised his knee, the latest medical issue to go with a torn labrum and fracture in his left shoulder and a left foot injury.