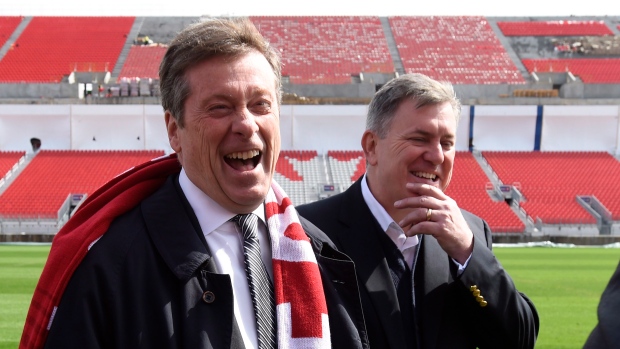 TORONTO - The clock is ticking if the Toronto Argonauts want to negotiate a deal that will see them play at BMO Field in 2016.

Bob Hunter, chief project development officer for Maple Leaf Sports & Entertainment, says they have a window of about a month if they want to prepare the stadium for CFL play next year.

The Argonauts will be homeless after the 2017 season when their lease at Rogers Centre expires. But they can leave earlier if they find a new venue.

BMO Field, a city-owned stadium that's home to Toronto FC, is undergoing a $120-million-plus renovation with MLSE footing most of the bill.

New, bigger dressing rooms would also have to be built to accommodate football.

Hunter pegged the cost of CFL conversion at anywhere from $20 million to $23 million.

MLSE, which owns Toronto FC and manages the stadium for the city, has already got $10 million from the city in the form of a loan to be paid back with interest over 20 years.

Similar contributions from the provincial and federal governments have yet to surface. An injection of money, originally pegged at $10 million, from the CFL or the Argos is to be determined.

MLSE is paying the rest, with president and CEO Tim Leiweke estimating the project is currently some $10 million over budget — mainly due to the tight time constraints of the project.

Mayor John Tory, a former CFL commissioner, says discussion are ongoing between the Argos and MLSE.

Leiweke seemed content to keep those talks behind closed doors.

"I think one of the good things and encouraging signs with the Argos is we've been able to keep the conversations quiet and I think we'll continue to do that," he said.

Tory, however, made a point of saying the CFL was not the reason the stadium was getting an overhaul.

"The purpose of this expansion was to make a first-class soccer and events stadium," he said. "And if it comes to pass that those discussions have the Argos ending up here, then obviously they'll do what they have to do to accommodate that.

"But those are discussions that are ongoing and that wasn't the main purpose of this renovation."

Tory acknowledged, however, there seemed to be few options for the Argos. He lamented the team had not been able to make Varsity Stadium its new home when the University of Toronto revamped its stadium.

The mayor did voice his support for the team.

"I only hope the CFL franchise is here for many years to come and can strengthen in this city because it's the oldest sports franchise we have and I'm obviously a great believer in the Canadian Football League," he said.