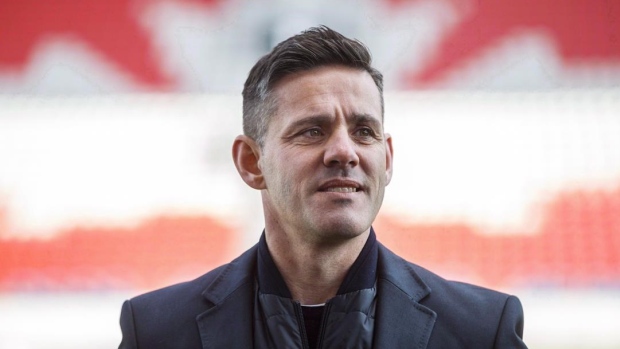 TORONTO — John Herdman may have been the only one to believe getting to Qatar 2022 was viable when he held his first camp in Murcia, Spain, in March 2018.

At that first gathering, the newly minted men's coach showed the players video of Canada clinching the 1986 World Cup berth with a 2-1 victory over Honduras in the modest confines of King George V Park in St. John's, N.L., on Sept. 14, 1985.

Sadly for Canadian soccer, it was ancient history.

Captain Atiba Hutchinson, at 39 the oldest member of the current squad, was two at the time. Defender Steven Vitoria and goalkeeper Milan Borjan, the second- and third-oldest players, were born in January and October 1987, respectively.

Herdman was 10 the last — and only — time Canada had qualified for the World Cup. He was growing up in Consett, England, and a passionate supporter of nearby Newcastle United.

Prior to this current batch of CONCACAF qualifiers, Herdman reminded his players of that historic 1985 win "to see how far we've come and how close we were."

Herdman said goals were set at that first camp in Spain.

"It was pretty clear that we wanted to pioneer in so many ways. And a big part of that was creating new Canada as a football nation," he said this week. "And we know qualifying for a World Cup is the most important part of that event. But there are other things, there are other goals that are important for us."

And with Canada co-hosting the 2026 World Cup with Mexico and the U.S., the successful qualifying road to Qatar is the start of a long runway for the Canadian men to take off.

Sadly Tony Waiters, who led Canada to that 1986 World Cup, was not around to watch the Canadian men's triumph Sunday. He passed away in early November at the age of 83.

After leading the Canadian women to back-to-back bronze at the Olympics, Herdman took over the men's team in January 2018. The team was ranked 94th in the world and 10th in CONCACAF at the time.

Thursday marked the four-year anniversary of Herdman's first game in charge of the men, a 1-0 win over New Zealand in Murcia, before just 75 people. His record at the men's helm prior to Sunday's game against Jamaica was 28-7-4 with the only losses to the U.S. (twice), Mexico (twice), Costa Rica, Haiti and Iceland.

"When John came in it was very clear that he had a plan on how he saw us moving forward," midfielder Mark-Anthony Kaye said in the lead-up to the final qualifying window.

"I think in that moment we didn't know exactly where we were going to go," he added. "I think anyone (who) tells you that they knew we were going to be where we are today, it was probably a lie … but over the course of that beginning to now, we've definitely all bought in and it's paid off."

The extent of the challenge facing Herdman became clear at that first camp when there were two fights in training.

“I was blown away,” Herdman recalled. “And people were saying, ‘Oh this is men’s football.’ And I stood against it. I told the guys it’s not men’s football. You can fight with your opponent but you don’t fight internally. I’ll never see that again.”

Herdman said he inherited a dysfunctional team split into cliques.

“I said unless you’re willing to change this, this team’s going nowhere,” he said. “And over time, you’ve seen a shift. The leaders, for me, brought the culture together. Now we can have fractious moments, where people are competing and pushing each other’s levels where it doesn’t end up in a complete split in the environment.

Speak to any player on the team these days and they point to a brotherhood. And they show that on the pitch. Take on one Canadian and chances are 10 more will come your way, with the bench as backup.

Herdman, a renowned motivator known for his attention to detail, is no stranger to fixing programs.

The Canadian women’s team was broken when Herdman took over in the wake of a last-place finish at the 2011 World Cup. Herdman put the squad back together again, reminding the women why they played soccer and for whom they did it.

He challenged them to inspire a nation.

The women rebounded from a roller-coaster semifinal loss to the powerful U.S. at the 2012 Olympics and defeated France in stoppage time to win bronze. They claimed bronze at the 2016 Rio Olympics. Now they are Olympic champions.

Ironically Herdman was runner-up to Carolina Morace when Canada Soccer looked for a successor to Even Pellerud as women’s coach in 2008.

But in breaking the news that he didn’t get the job, then-general secretary Peter Montopoli told him to stay in touch.

“And he actually did, over that three-year period,” said Herdman. “And then I got the next call in 2011 from Peter which was “We want you for the job.’ And we haven’t really looked back since.

Herdman said players have to understand they are fighting for a bigger cause. And that they have to do it together.

“When you’ve got trust and people are clear on what they’ve got to do on the pitch, then chemistry forms,” he said. “That’s where people are willing to mask each other’s weaknesses and highlight each other’s strengths. They’re willing to do things to make you look good."

“That chemistry piece, it can only form when trust is strong and when people are clear on the roles and responsibilities of the collective," he added. "It’s a formula that I used with the women’s team and it’s a formula that I’m using here.”

Piette would be here but is injured.

Herdman values such commitment, especially given his players have had to criss-cross the globe during a pandemic since qualifying started in March 2021 with a 5-1 win over Bermuda in Orlando.

"There's a loyalty to people who've committed to the journey," he said. "There's a loyalty to those players that have showed up every (international) window. And some, they may not have contributed massively on the pitch but their contribution off the pitch, when people really understand how teams form and team spirit and culture, it's as much about what you do off the field and how you show up to training and accept decisions. And then stay ready.

"So there's a group of men that have shown that."

The bond is very strong among the Canadian players.

"I'll invite all of them to my wedding, to be honest" said midfielder Stephen Eustaquio, who plays his club football in Portugal for FC Porto. "That's how much I love them. We love each other."