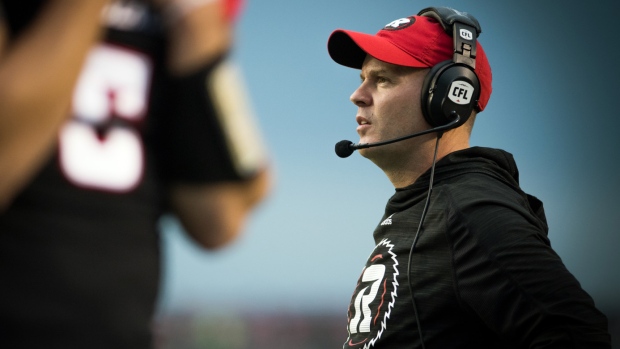 Farhan Lalji: “Former Ottawa Redblacks head coach Rick Campbell is still the frontrunner and I understand there’s going to be an interview between GM Ed Hervey, president Rick LeLacheur, and Campbell at the end of the coming week. Two other names, the offensive coordinators for both Grey Cup teams, Tommy Condell of the Hamilton Tiger-Cats and Paul LaPolice of the Winnipeg Blue Bombers, are also expected to get heavy consideration.

“From Ed Hervey’s standpoint, he wants to make sure that he can do everything he can to take advantage of offensive minds and offensive support around quarterback Mike Reilly. That’s a real priority for him. And given what happened with DeVone Claybrooks, I think experience is another priority; ideally a former head coach but if not, somebody who’s had plenty of mileage around the league.

Dave Naylor: “The Redblacks have been preparing their short list to begin reaching out to candidates and on that list I expect one internal candidate to get some consideration: special teams coordinator Bob Dyce. He was an interim head coach with the Saskatchewan Roughriders a few years ago (2015).

Both coordinators with the Hamilton Tiger-Cats, Mark Washington on defence and Tommy Condell on offence, I think will also get some attention.

And an intriguing name: Ryan Dinwiddie, the quarterbacks coach of the Calgary Stampeders. He’s never been a coordinator, but of course (has been) very successful in Calgary including with Nick Arbuckle, their backup quarterback, who has said he will go to free agency. He wants to be a starting quarterback somewhere.

Lalji: Jason Maas in Edmonton, his future is very much up in the air. GM Brock Sunderland has been doing his due diligence. When the players had their exit meetings he asked them to rate their head coach, something he also did a year ago, and they’re talking to a number of stakeholders, turning over every rock to make sure they know what the right decision is.

Lalji: Mike O’Shea, it sounds like, is going to be staying with the Winnipeg Blue Bombers. I know there was some suggestion that he wanted to leave about a month ago and go to Toronto at the end of the season. He of course is without a contract and there were also reports that he turned down multiple contract offers (during the season). That is not the truth. He merely didn’t want the opportunity to negotiate once the season started … But the belief is he’s happy in Winnipeg and it won’t be long before a deal gets done.

Naylor: The Argonauts are leaning heavily at bringing Corey Chamblin back for a second season. They’re expected to meet with him this week to finalize that. I think if Mike O’Shea was going to be free, that would have intrigued the Argonauts, (O’Shea is) a former Argo and successful head coach. But all appearances are that O’Shea wants to be back in Winnipeg, they want him back, they’re expected to get something done, and I think the Argonauts will stick with Chamblin for another season.