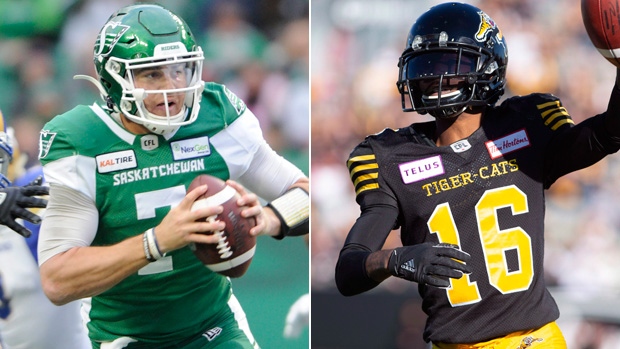 Each player represents a dominant force from opposing East and West Divisions. Only one will emerge as the recipient; however, each player has a case to be made for their bid.

The winner will be selected at the 2019 CFL Awards on Thursday at Calgary’s Scotiabank Saddledome.

Fajardo, a first year starter, took a peculiar path to CFL stardom during this year’s campaign and seized an opportunity presented to him early on.

The 27-year-old began the season as backup to Zack Collaros, until the latter suffered a significant head injury during the opening drive of the Roughriders’ season.  A door opened for Fajardo to take the reins as a starting quarterback for the first time in his CFL career.

What appeared to be a dire loss for Saskatchewan, soon turned into a bright spot for the team as Fajardo led them to a West Division-leading 13-5-0 record.

Fajardo stepped up and provided a veteran-esque presence and led the league with 4,302 passing yards. The native of Brea, Calif., also threw 18 touchdown passes and limited himself to eight interceptions. He had thrown 414 combined yards through his previous three seasons combined with the Toronto Argonauts and BC Lions.

Seven of the last 10 award winners have been quarterbacks, which bodes well for the rising star if history is any indication.

Banks, on the other hand, may have something to say about that.

The 31-year-old veteran is looking to become the first wide receiver to take home the honour since the ‘Flyin’ Hawaiian’ Chad Owens did so with the Argos back in 2012.

Speedy Banks was named to his fifth consecutive East All-Star team and led the CFL in multiple offensive categories. His 112 receptions, 1,550 receiving yards, and 13 touchdown receptions topped each of his peers and provided the Tiger-Cats with much needed offensive stability following the loss of quarterback Jeremiah Masoli in Week 7.

Without such a dynamic receiver, perhaps the Tiger-Cats wouldn’t have clinched their best regular season record in franchise history to lead the league. A Grey Cup berth may also be in question.

As far as Banks’ kick return game goes, there aren’t many that can do it as well as he has throughout his career. Banks dazzled opponents and returned two missed field goal attempts for touchdowns this season, adding to his historical dominance in this regard.

While the electric wide receiver still has business to take care of in the 107th Grey Cup game on Sunday, he also has a compelling argument to warrant his first MOP Award. Tune in on Thursday to find out.