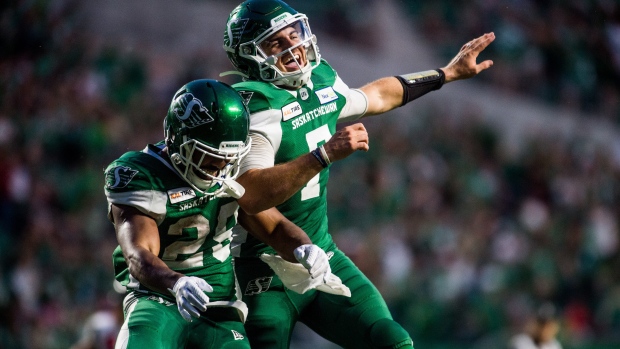 He began the year as Saskatchewan's backup quarterback but was thrust into the starting lineup just three plays into the Roughriders' season-opening loss in Hamilton when incumbent Zach Collaros suffered a concussion. Fajardo, 27, not only has provided stability under centre, but has played a big role in the Riders (9-4) clinching a playoff berth for a third straight season.

Fajardo was 23-of-27 passing for 278 yards and three TDs in Saskatchewan's 41-16 road win over the Toronto Argonauts on Saturday. He also ran for a game-high 80 yards and a touchdown.

Heady stuff, considering Fajardo served as a second- or third-string quarterback with Toronto (2016-17) and B.C. (2018) before signing with Saskatchewan.

"Zach unfortunately went down early," said veteran linebacker Solomon Elimimian, also in his first season with Saskatchewan. "Cody came in and seized the opportunity and really stabilized things for us.

"We're playing with confidence individually and with each other and that's something special. We just want to keep going, each game has its own challenges. We don't want to be overconfident and lose focus and sight of what got you there."

Saskatchewan dealt Collaros to Toronto on July 31, although he has yet to play for the Argos.

"The biggest thing was if I got my opportunity to never regret it," Fajardo said. "Go out, play as hard as I can each and every game because I never know when my last snap will be.

"I think that's one thing many football guys have to understand, you can't control the way your season or career is going. So for me, it's playing every play like it's my last and just lay it on the line for my guys because they respect me and look up to me and so I want to do everything I can to help this team, build this team and be positive."

Timing is everything as Fajardo is scheduled to become a free agent next February.

But Fajardo and Co. still have much to do. Saskatchewan is battling Calgary (9-4) and Winnipeg (9-5) for top spot in the West Division and home-field advantage in the conference final.

Saskatchewan controls its own destiny with all five of its remaining regular-season games being against West Division rivals, starting with Winnipeg on Saturday. The winner of that contest claims the season series and tiebreaker should they end the year with identical records.

Winnipeg is coming off consecutive losses, including a 33-13 decision to Hamilton last week, the Bombers' first at home this season. While Saskatchewan boasts a young roster, it has established veterans like Elimimian — who won a Grey Cup with B.C. in 2011 and in '14 was the CFL's outstanding performer — to lean on.

"Everyone has a role on this team," Elimimian said. "For guys who haven't experienced the highs and lows of the CFL and how each season can take a turn for the better or worst really fast, it's good to have people who've been through that.

"I've been in situations where we started red hot and unfortunately didn't go anywhere and also had a season (2011) where we went 0-5 and won the Grey Cup and so I understand you must prepare each week with the right mindset.

"Nothing will ever be given . . . you must show up every game because each team is fighting for something special."

NOT A FAN: Social media is a fact of life for many CFL players but Craig Dickenson, the Saskatchewan Roughriders' first-year head coach, isn't a fan.

"I don't think Twitter is a good thing at all," he said following Saskatchewan's win over Toronto on Saturday night. "There's nothing good that comes from Twitter so any time somebody says anything, I just cringe."

Hamilton (league-best 11-3 record) went 2-1 on its Western road trip, finishing it with the win in Winnipeg. The Ticats were a blocked field goal — that coming late in their 19-18 loss in Calgary — away from sweeping the three road contests.

Ticats linebacker Simoni Lawrence anchored the Winnipeg win with a league-record 17 tackles. It's the latest development in what has been an eventful season for Lawrence, who served a two-game suspension for hitting Saskatchewan quarterback Zach Collaros in the head and twice has been fined for separate infractions.

The bad news for Edmonton (7-7) — besides starting quarterback Trevor Harris being on the six-game injured list — is Hamilton's unbeaten at home (6-0) and 4-1 versus West Division teams.

Hamilton has clinched a playoff berth but is looking to finish atop the East and claim home field for the division final.

BYE WEEK: At least this week, Ottawa head coach Rick Campbell won't have to decide on a starting quarterback.

Campbell has alternated between Dominique Davis and Jonathon Jennings as his starters. Jennings started against Edmonton but Davis also played.

It's been a huge dropoff for Ottawa, which finished atop the East Division last year with an 11-7 record before a 27-16 Grey Cup loss to Calgary. It was the Redblacks' third championship appearance in four seasons, winning in 2016.

Among the players Ottawa lost this off-season were Harris, receiver Greg Ellingson and offensive lineman SirVincent Rogers (all to Edmonton), receiver Diontae Spencer (NFL) and running back William Powell (Saskatchewan). The Redblacks haven't endured a year quite like this since going 2-16 in their inaugural '14 campaign.

This report by The Canadian Press was first published Sept. 30, 2019.