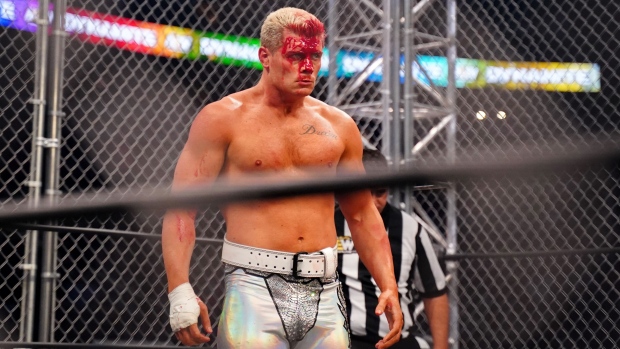 All Elite Wrestling might only be in its second year of existence, but the nascent promotion has already found its first great feud – one set to reach its climax at Saturday night’s Revolution pay-per-view event in Chicago.

Cody Rhodes will finally get his chance at revenge against former protege Maxwell Jacob Friedman (MJF) after four memorable months of buildup consisting of some tremendous promos, brutal visuals and one insane high spot from atop a steel cage.

Rhodes, 34, believes one of the reasons why this program is clicking with fans is because of just how detestable the MJF character is and how truly devoted Friedman is to the portrayal.

“I think maybe there’s just a pure evil to Max that wrestling hasn’t seen in some time," Rhodes told TSN.ca. “There are good guys and bad guys in wrestling, but I really think Max is kind of uniquely positioned where the only people who might know who he really is are his family who he lives with in the house he grew up in Long Island. They might be the only people who know who that individual really is because from the moment he steps out of the house and puts his foot on the plane to when he leaves his commitment to the persona of MJF is present. And I think that is entertaining.”

The feud began at November’s Full Gear pay-per-view when Cody took on Chris Jericho for the AEW World Championship with the stipulation that should Cody lose, he would never be able to challenge for the promotion’s top title ever again.

With Cody in Jericho’s Walls of Jericho submission hold, MJF – who was in Cody’s corner – threw in the towel, giving Jericho the victory. A tearful Friedman embraced Rhodes and explained to him that he was only looking out for his best interests. But it was all a ruse as MJF kicked Cody low and laid a ferocious beating on the “American Nightmare,” ending their friendship and alliance.

With MJF a hated heel, Cody is positioned as one of the promotions top babyfaces, if not the top. While Cody has found great success with his “American Nightmare” persona - a twist on the “American Dream” moniker famously associated with his legendary father, the late Dusty Rhodes – as a heel, he’s enjoying his current relationship with the fans.

“I’m just in this really beautiful period of my career where I don’t really have any explanation for it other than I’m humbled and grateful and incredibly lucky that fans are connecting with me in the way that they are,” Rhodes said. “I didn’t think it would be like this right in the first year of AEW. I thought it might be something that would happen later, but I think the two forces coming at each other is combustible and more combustible than anything else in wrestling [right now].”

One of the ways that AEW’s business model differs from most modern pro wrestling is through its use of PPV. It’s become commonplace for companies to run 12 pay-per-view events per year, meaning that each show has roughly one month of build to it, making storylines reach their ends much faster than what would be optimal.

“TV ratings are a scary thing,” said Rhodes, who on top of being a performer is also an AEW executive vice president. “They can be with the weeklies and minute-by-minutes and I know it’s probably irritating to hear people talk about that, but as an executive here, it’s an algorithm that we study. The word is hotshot [speeding up an angle] and the entire industry went into an area where everything gets hotshotted. And I don’t know why that ever was the case.”

Because AEW only runs four PPVs a year, feuds and programs get more time to breathe with considerably longer builds. The challenge, then, becomes maintaining momentum over several weeks and ensuring that weekly Dynamite viewers will buy the PPV. To make each pay-per-view feel more special, Rhodes has taken philosophical inspiration from outside of professional wrestling.

“I’m a big fan of the big fights,” Cody said. “I’ve learned more about wrestling recently from UFC and boxing than I have from wrestling. And I mean no disrespect to an industry I’ve loved my entire life, I just mean the big fights and the presence of somebody like a Conor McGregor, the presence of a Floyd Mayweather and even the other night with what we saw with Deontay [Wilder] and [Tyson] Fury, you don’t get that every week, but you do get some of it. And that some of it is super important. It can’t be throwaway.”

The Cody/MJF program was able to sustain itself over several weeks by its unique structure. Friedman would only grant Rhodes a match should he agree to the terms he laid out over the course of the past months. Prior to taking on MJF at Revolution, Cody had to receive 10 lashings with a belt from Friedman, refrain from touching MJF up until Revolution and defeat Michael Wardlow – MJF’s monstrous bodyguard – in a steel-cage match.

On the Feb. 5 Dynamite’s main-event segment, MJF whipped Cody’s back until it was bloody and raw with Cody’s wife, Brandi Rhodes, brother Dustin Rhodes and fellow ELITE members Nick and Matt Jackson watching from ringside. The lashings culminated with another low blow from MJF to a prone Cody as he was being helped to his feet.

Two weeks later, Cody took on Wardlow in a steel cage to fulfill the rest of the agreement. The match would mark Wardlow’s first with the company and Cody believes he more than held his own in a high-profile debut.

“I think with Wardlow, there’s something very special there, perhaps,” Rhodes said. “I don’t want to overstate or jump the gun, but to have a big, strong, drug-free guy like that – a handsome man, young who’s basically Age 0 in the viewers’ eyes and he has a kind of ferocity that wrestlers try and emulate and sometimes try and pretend to have, where it’s very much beneath his skin. I think Wardlow has a big, big future.”

Cody went on to win the cage match with a moonsault from its top. The spot would go viral, but it’s one that Rhodes is still coming to terms with himself and one he has difficulty in rewatching.

“The cage was too tall,” Cody said. “I don’t even like watching it back. Just flatout, the cage was too tall. The production guys at AEW are second to none. Each individual on this team is amazing, but the guy who designed that cage, I don’t like him and I’m glad I don’t know his name. That thing was just too damn tall. It was like three feet taller than a standard WWE cage, plus the truss. The truss is that prop that hooks to the rigging.”

For Cody, the spot was one where he got caught up in the moment.

“I’m a red-light guy,” Rhodes explained. “I’m very unathletic when the red light is not on, but if you turn that red light on, I can swim faster, I can run a faster 40 and I can bench three plates-plus. It’s stupid. It’s just in my blood. We’re an entertainment family. When the red light’s on, I can go and the red light was definitely on, it was my hometown. Atlanta doesn’t settle for anything less than spectacular. My wife, the thing I love the most, was right there outside the ring. Arn Anderson, who if I had told him I was going to do in 2008 or 2009 when he was my agent in WWE, he would have smacked me in the back of the head, so I had to make him watch it. For it to be successful was special. I almost don’t like even talking about it because it just stands for itself. I feel like I made a mistake in the days after. I did a few interviews where we talked about it, but I don’t even know how I feel about the moonsault other than that the cage was too damn high.”

Asked if he took inspiration from any other famous feuds from wrestling past for the program with MJF, Cody says it was one that took on a life of its own.

“This one situation here has kind of escalated in a very organic and in its own way,” Cody said. “I don’t know if I can really think of one that makes me think there were similarities in the rivalry and how they happened. I do know that pretty much anything that [Jim Crockett’s] Mid-South [Wrestling] did – I’ve got a bit of a Mid-South bug where I was really diving into a lot of the detail work they did because there were details on every rivalry, not unlike how Macho Man, later in the WWF, and his rivalry with Jake Roberts, for example, did. So I really can’t think of a parallel for it. Organically, it’s come into its own, but there are shades of Tommy Dreamer and Raven [from Extreme Championship Wrestling]...it’s plucked from everywhere, which would make sense if you look at me because I have loved every era of wrestling. The stories that I have on TV aren’t going to [borrow] from a particular one spot in time. They’re going to be from all over the map.”

With the lead-up successful, it’s now time to stick the landing with Saturday night’s match. As the holder of multiple titles in WWE, Ring of Honor and New Japan Pro-Wrestling, Cody is no stranger to high-profile matches, but for Friedman, the Revolution match will be by far the biggest of the soon-to-be-24-year-old’s young career. Cody believes he’s capable of performing.

“A very long time ago, I sat in my office with Max and QT Marshall, who’s been an associate producer for me and really been a driving force behind AEW that people don’t realize,” Rhodes said. “We both told Max the same thing: ‘You need to grow the eff up.’ The internet fame is great, but a real connection and a real leader is what we needed Max to become and I don’t know, but I do think he took that to heart. We need locker room leaders and when I say that I don’t mean people who say they’re locker room leaders. We need people who go out there and lead by example meaning that under the big lights the most important thing you can do is deliver.”