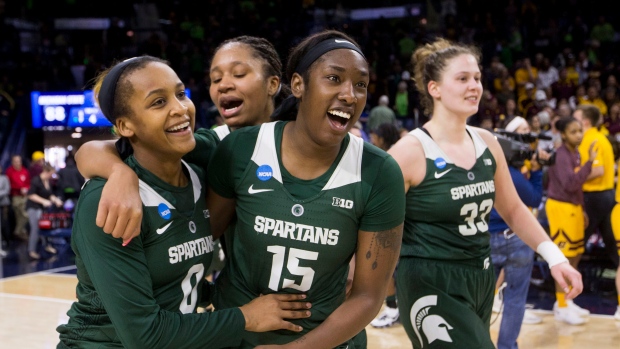 SOUTH BEND, Ind. -- When crunch time came Saturday against her alma mater, Michigan State coach Suzy Merchant trusted a Canadian import to help the Spartans survive and advance into the second round of the NCAA Chicago Regional.

"We were looking for a bucket to win the game and coach trusted me to make that last play and I did," said Shay Colley, a redshirt junior from Brampton, Ont., whose driving layup with 7.6 seconds left lifted the No. 9-seeded Spartans to an 88-87 victory over No. 8 Central Michigan.

The Chippewas had one final chance, but Micaela Kelly's off-balance, hurried 15-footer at the buzzer was off the mark. Central Michigan had taken an 87-86 lead on Presley Hudson's 3-pointer with 20.3 seconds remaining.

"It was probably a very entertaining game for our fans to watch," Merchant said. "As coaches, we could have probably used a little bit more span of a victory."

Colley, who had 13 points along with seven rebounds and six assists, was one of five in double figures for the Spartans, who got 21 points off the bench from Sidney Cooks on 10-of-14 shooting. Nia Clouden had 16 points, Taryn McCutcheon 12 points on four 3-pointers and Jenna Allen added 10.

The quintet of scorers overcame 78 points from Central Michigan's trio of Reyna Frost (34), Kelly (24) and Hudson (20), who earlier this season broke the school career assists record set by Merchant, a 1991 graduate. Kelly and Hudson each had five assists for Sue Guevara's Chippewas, who closed the season at 25-8.

"That was a heckuva ballgame," Guevara said. "My heart couldn't be happier with the effort we gave. We just didn't have any answers inside."

There were nine lead changes in the game that was tied five times. The two teams, meeting for the first time since the 2005-06 season despite their campuses being 68 miles from each other, swapped the lead five times in the final six minutes.

Hot shooting, especially from long range, helped Michigan State jump out to an early 25-13 lead in the first quarter.

Michigan State: The Spartans are making their 17th all-time NCAA appearance, their 14th in the last 17 years. With the victory Saturday, Michigan State improved to 8-5 this season against nine opponents that reached the NCAA Tournament. The Spartans won the points in the paint, 52-46, a 22-17 edge on second-chance shots thanks to 13 offensive rebounds and outscored Central's bench, 29-7.

Central Michigan: The Chippewas were making their second straight NCAA appearance and fifth overall. A slow start hampered Central Michigan, which trailed by 12 at the 2:03 but managed to come back behind Frost.