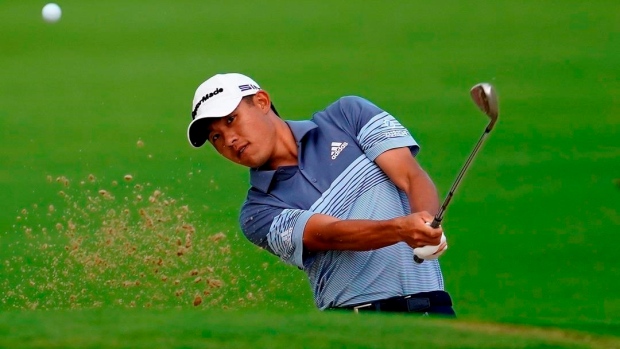 HONOLULU — The wind blew so hard that palm trees looked as though they were made of rubber. The Pacific looked angrier than usual. Some of the sights Thursday at the Sony Open made it clear that playing golf in Hawaii was no vacation.

Collin Morikawa managed better than everyone. He learned enough about the wind last week on Maui to cope with it on Oahua, getting through the relentless 30 mph win without a bogey for a 5-under 65 and a two-shot lead.

“It's tough out here," Morikawa said. "If you have a 20-foot birdie putt, you've got to factor in the wind, the rain, everything. So playing last week got me prepared for today in the wind, and I look forward to the next few days.”

Ryan Palmer was among four players at 67, with Marc Leishman and Corey Conners among those at 68.

Justin Thomas, who won a playoff last week in Kapalua, struggled early in the wind and had to keep it together for a 72. A year ago, that might have been the first step toward a weekend off. On this day, it was inside the cut line.

Maui was hard work in the wind. This week might be worse because Waialae is so exposed.

“Not exactly what you're looking for after a week like last week,” Thomas said. “Just trying to find something where it's easy to get in play and on the green. It was a grind, which was what last week was, so it was really hard to stay focused. Felt like I didn't do a good job of that to start, but then played pretty well the last 13 or so holes.”

A year ago, Adam Svensson of Surrey, B.C., opened with a 61, and all that gave him was a one-shot lead. Seventy-five players broke par. This year was a little different. Only 30 players broke par when play was suspended by darkness. The scoring average was 72.04, compared with 69.64 in the opening round last year.

“It was hard work out there,” defending champion Matt Kuchar said after a 69. “This I don't recall in a long time. What a challenge. The wind is blowing as hard as I recall it blowing.”

Corey Conners of Listowel, Ont., shot a 2-under 68 to sit in a tie for sixth a year after he finished tied for third. Nick Taylor of Abbotsford, B.C., was tied for 31st at even-par 70, while Graham DeLaet of Weyburn, Sask., and David Hearn of Brantford, Ont., were grouped together at 63rd after shooting 2-over 72s.

It was so strong that even with the tee moved forward on the par-3 fourth hole at Waialae so that it played 162 yards, Morikawa still hit 4-iron. It was one of his better shots, seven feet right of the flag, for birdie.

The best was his finish on the par-5 ninth, 504 yards and typically the easiest scoring hole. His drive peeled to the right into a hurting, left-to-right wind and found a bunker. His next shot caught the top of the lip, leaving him 189 yards away.

“At that point, I was trying to get out with par,” Morikawa said.

He went with a 4-iron — the next longest club in his bag is a 2-iron — and hit it so well the wind didn't move it. The ball came down about 6 feet from the cup for his final birdie.

Rain pounded the course about an hour before the first tee time, making the greens even softer. The wind never stopped, and even in sunshine, showers popped up out of nowhere. It was not much different from last week on Maui, except it was a much easier walk on a relatively flat surface.

Patrick Reed, who lost in a playoff to Thomas last week in the Sentry Tournament of Champions, was at 3 under midway through his back before dropping shots from the water (No. 2) and the sand (No. 4) and having to settle for a 69.

Those who know Waialae well from playing so many years could not remember this much wind for so much of the day.

“We've all probably experienced wind like this at some point, but it's rare,” Zach Johnson said after a 69. “I've not experienced it here.”

Morikawa can't claim to feel at home, even with so much family living on Oahu. He had never played Waialae until a practice round on Tuesday, but he had enough recent experience in the tropical gusts to get the job done.

He didn't make everything, but he made the right putts — two birdies on par 3s, both par 5s and a wedge to 8 feet on No. 5. He also holed a 10-foot par putt after finding a bunker left of the green on No. 14.

“I think the harder conditions, the better for me,” Morikawa said. “Ball-strikers just want to control everything — control the ball — and I had complete control today. That's what you want to do.”