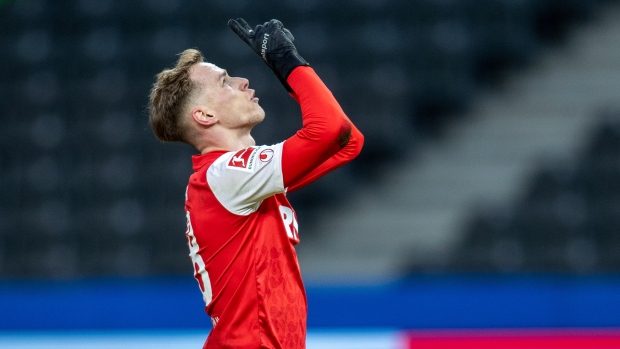 BERLIN (AP) — Jan Thielmann scored in injury time to help Cologne move to sixth place in the Bundesliga with a 3-1 win at Hertha Berlin on Sunday.

Hertha had to contend with coronavirus infections during the week. Santiago Ascacibar and Lucas Tousart recovered in time to play — the latter as a substitute — but coach Tayfun Korkut was without defender Dedryck Boyata and forward Ishak Belfodil.

Uth crossed for Modeste to head the opening goal a minute later, and Duda returned a half-cleared ball to make it 2-0 in the 32nd.

Referee Tobias Stieler was replaced at the break by Alexander Sather due to an apparent injury.

Hertha looked a shadow of the team that beat Borussia Dortmund before the winter break, but the home team improved. Darida pulled a goal back in the 57th when his free kick managed to evade teammates and opponents alike before nestling inside the far post.

Hertha defender Niklas Stark gifted the visitors a great chance midway through the second half, when he drew a fine save from his own goalkeeper Alexander Schwolow with a misplaced back-pass. Schwolow was forced to use his hand, giving Cologne a free kick inside the penalty box. But the Hertha ’keeper produced another save to deny Uth from close range.

Hertha kept trying at the other end but lacked a cutting edge.

Thielmann, a substitute, sealed the win on a counterattack in injury time when he won the ball off Darida and rounded the goalkeeper before scoring.