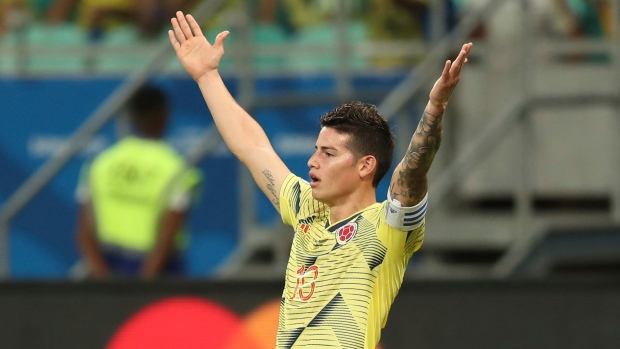 SALVADOR, Brazil — Colombia beat Paraguay 1-0 Sunday with a second-string team to stay perfect at the Copa America with three wins and without conceding any goals. The win also helped Argentina to advance from Group B in second place.

The only goal of the match at the Arena Fonte Nova in Salvador was scored in the 31st minute by midfielder Gustavo Cuellar.

Paraguay got two points and guest team Qatar ended its Copa America participation in fourth, with one point.

Colombia will have to wait for Group C to finish on Monday to know who it will play in the quarterfinals. Colombia, a team that has won the Copa America only once in 2001, next faces the second-place team from Group C. Defending champion Chile leads that group with six points and plays Uruguay with four points.

"If you have a dream and you want to be champion, you need to have a group of players that are ready to play," said Colombia coach Carlos Queiroz. "The true Copa America begins now."

Paraguay must hope for a draw between Japan and Ecuador in Group C to advance as one of the two best third-place finishers.

With its spot secured in the knockout stage, Colombia used an alternative lineup.

Goalkeeper Alvaro Montero replaced David Ospina, who had to travel home due to family issues, and Colombia went for defenders Cristian Zapata and Jhon Lucumi. Midfielder Cuellar started instead of Wilmar Barrios, and Edwin Cardona took the place of James Rodriguez.

Falcao did not score any goals in Copa America's group stage.

"He is saving (them)," Queiroz joked. "We wish he had scored today, but the work he has done for the team is fantastic."

Paraguay brought striker Oscar Cardozo back to its starting lineup, but that move had little impact on the Colombian defence.

Colombia scored its winning goal when Cuellar received the ball on the right, ran past a defender and shot between the legs of goalkeeper Gatito Fernandez.

In the second half, James replaced Cuadrado and gave an assist for Luis Diaz to score a second, but it was disallowed by VAR because of a handball by Diaz.

Colombia's opponent in the quarterfinals is likely to come from the Uruguay vs. Chile match in Rio de Janeiro on Monday.

"There is not much to say about Uruguay, it is the team that has won the Copa the most," Queiroz said. "Oscar Tabarez is one of the coaches that I admire the most. Chile has great players."