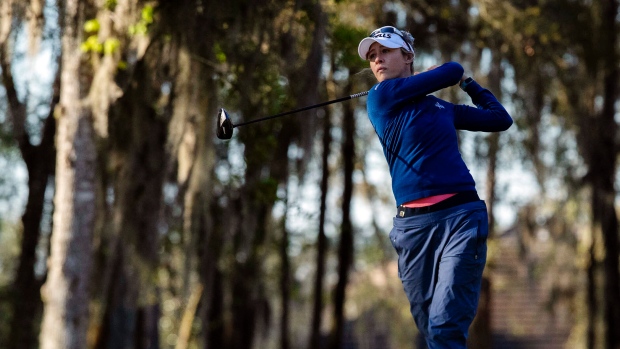 OCALA, Fla. — Nelly Korda didn't miss a beat four days after her first LPGA Tour title on U.S. soil, outplaying her sister and the world's No. 1 player for a 5-under 67 to share the lead at the Drive On Championship.

Former NCAA champion Jennifer Kupcho managed a 67 despite playing most of the back nine with a migraine that blurs her vision. Austin Ernst also had a 67 at Golden Ocala.

The third-ranked Korda was part of a featured group that played early before the cool morning yielded to warm sunshine. She played alongside her older sister, Jessica, who had a 69; and Jin Young Ko, the No. 1 player in women's golf who had a 75.

It's a small sample size, but this has been the year of the Kordas.

Jessica Korda won a playoff to start the LPGA season at the Diamond Resorts Tournament of Champions. Nelly Korda had a three-shot victory last week in the Gainbridge LPGA at Lake Nona.

“Nelly and I were talking about being in a fish bowl today,” Jessica Korda said.

Since winning at Lake Nona — her fourth career victory and first domestic title — Nelly Korda did a little laundry, took it easy with nine-hole practice rounds at Golden Ocala, tightened up her swing and it was like nothing had changed.

Among her five birdies, she chipped in from 50 feet from the rough below the 10th green and down a ridge.

Jessica Korda had six birdies, but she had to rally after taking a double bogey on the par-3 11th hole that left her 2 over for the round. She closed with four birdies over the last seven holes.

There is no sibling rivalry with these two, and no bragging rights, either.

It wasn't as much fun for Ko after she opened with a birdie. She shot 40 on the back nine and wound up with her highest start on the LPGA Tour since a 77 at Hazeltine in the 2019 KPMG Women's PGA Championship.

Golden Ocala is renowned for having replica holes from famous courses, three of them from Augusta National and two from the Old Course at St. Andrews.

Kupcho, along with her NCAA title at Wake Forest, captured the inaugural Augusta National Women's Amateur in 2019 with a back-nine charge. That day at the home of the Masters included her having to get through one of her migraines, in which her vision suffers.

Thursday was not much different.

“Honestly, about on 14 I was ready to get off the golf course,” Kupcho said.

By then, she had already done enough right. Kupcho ran off four straight birdies, two short putts on the par 5s on the front nine sandwiched around a 10-footer on No. 6, and her final birdie was on the 13th.

She said she had three migraines during the off-season and never knows when one is coming. This one started as she was over a shot early on the back nine.

“Even right now, it’s really blurry,” Kupcho said. “I can’t really see anything over to the left. So, yeah, it’s definitely really hard. I pretty much just leaned a lot on my caddie and just trusted him and tried to do the best that I could.”

Ernst got off to a rough start and was 2 over through four holes after back-to-back bogeys. She made seven birdies the rest of the way and shot 31 on the back nine.

Jing Yan of China and Jaye Marie Green shot 68, and Lydia Ko was in the group at 69 with Jessica Korda.