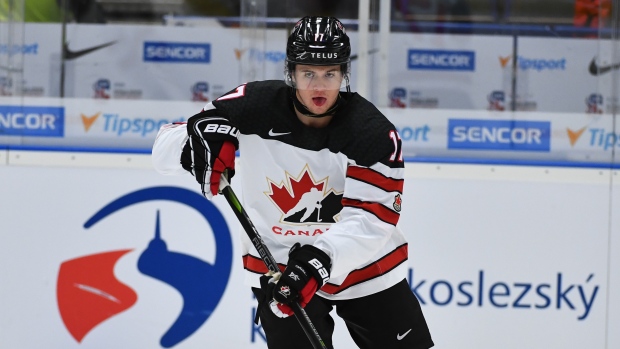 Team Canada skated at the practice rink at Ostravar Arena on Sunday.

With Alexis Lafreniere out for Monday's game against Germany, Dale Hunter is turning to a familiar face to create a spark. Connor McMichael, who plays for Hunter in London and led the OHL in scoring when he left for the World Juniors, was promoted to a line with Barrett Hayton and Nolan Foote at practice.

"He knows exactly what Dale wants in terms of system, of execution and I think that helps him," said assistant coach Andre Tourigny. "And he’s confident, it’s nothing new for him. He's comfy with the expectations so we feel Mike can be the guy who can be the wildcard here."

McMichael has 25 goals in 27 games this season and is the only Canadian other than Lafreniere to light the lamp during five-on-five play at the World Juniors. The Capitals' first-round pick in June's draft has skated mostly on the fourth line since camp opened.

"He's a highly-skilled player," said Hayton. "You see what he's done in the OHL this year, it's very impressive, the points and offence he brings, so definitely having him on my wing is really exciting and I thought we were moving it around pretty good out there today."

Dawson Mercer is also getting a bigger role. The first Newfoundland native in 10 years to make Team Canada at the World Juniors, Mercer started the tournament as the 13th forward playing only one minute and one second against the United States on Boxing Day.

"I wanted to make sure I still motivated the guys," Mercer said of his mindset. "I looked at it as, there’s only one place to go, you can only move up in the line-up."

Mercer, an 18-year-old draft-eligible right winger, has moved up all the way to the second line with Joe Veleno and Quinton Byfield. It was only two years ago in Buffalo that Tyler Steenbergen started as Canada's 13th forward before emerging as the hero in the gold-medal game.

"He scored the winning goal back then and I’d love to get to that same situation that he did," Mercer said with a smile.

Mercer played a season and a half with Veleno in Drummondville although they rarely skated on the same line. Still, there is a familiarity with his game.

"It's a good feeling being out there with him," Mercer said.

"Bo Byram is a key player for us," Tourigny said, "and he’s playing really well right now, and Bernard-Docker as well, so I think it’s a good mix on the three pairings. We have really good puck-moving defencemen and we have defencemen who can defend on all our pairings."

After giving up 10 goals in two games, the focus is on defending.

The pairing of Ty Smith and Jared McIsaac remained intact.

Hayton was lost in his own thoughts following the most lopsided loss in Canadian World Juniors history and that's why the captain says he didn't remove his helmet for the Russian national anthem.

"I definitely didn’t mean any disrespect," Hayton said in his first media session since the incident. "I had no intent behind it but, obviously, I have to own my actions."

Some Russian players, including captain Grigori Denisenko, expressed displeasure with Hayton on the ice and refused to shake his hand.

"I was definitely a little bit confused," Hayton said, "but after the fact you recognize your mistake."

Igor Larionov appreciated the apology from Hayton and Hockey Canada.

In fact, the Russian team discussed the situation this morning with the coaching staff trying to create a teachable moment.

"It's got to be first-class responses and if you lose, you know, you have to be respectful and, if you win, same thing," Larionov said.

The scoreboard was ugly on Saturday, but Team Canada believes the fix is easy.

"They had more urgency than us," observed Tourigny. "Their battle level was higher than ours and that’s something we can control so that’s good news, because if it would’ve been something in the structure or talent or something like that, there’s nothing you can do, you got what you got."

After beating the Americans on Boxing Day, Canada let its foot off the gas against a hungry Russian team that had lost its opener.

"Humbled is a great word for it," said Hayton. "We felt a little too good about ourselves."

"Maybe overconfidence," said goalie Nico Daws, "maybe just being a little too comfortable, not really knowing what to expect from other teams. You see the Czech Republic beat Russia and you’re kind of wondering like, 'Are they that good?' And then you come and not know what to expect and they come out strong, you know, passionate after losing a game and I don’t think we were really expecting that, we weren’t ready for it, but now we know what to expect and we'll be a lot better."

Canada hasn't named a starter for Monday's game. Tourigny says they are considering every option, including Olivier Rodrigue, who didn't dress in the first two games. Seravalli has more on the goalie situation here.