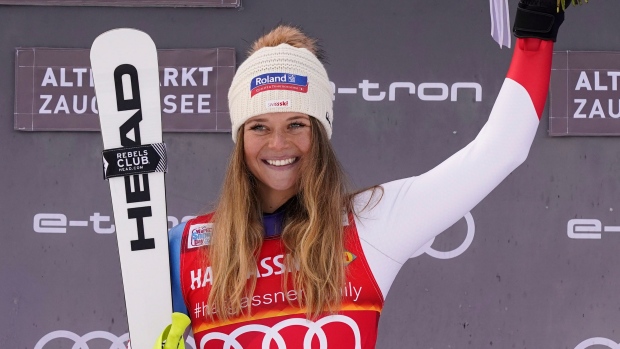 “I was just in awe watching her down in the finish," Gisin said of Suter's run immediately after her own. "That’s really cool.”

Olympic downhill champion Sofia Goggia was fourth, 1.01 back, starting immediately after the second delay for fog.

Mikaela Shiffrin, the overall World Cup standings leader, skipped Saturday’s race. She could start in an Alpine combined event Sunday when Gisin, the Olympic champion, will also be favoured.

Suter’s first top-tier race victory was predicted after being among the most reliable downhill racers over the last year.

She won a silver medal at the world championships last February, when Lindsey Vonn took bronze in her career farewell, then finished the World Cup season with two third-place finishes.

“After the world championships it took a lot of pressure from me,” Suter said. "Since then I can ski again with a lot of fun. This is the reason why I am so fast at the moment.”

The 25-year-old Swiss was second and fifth in the two previous downhills this season, both held at Lake Louise, Canada.

Attacking on an overcast day, Suter mastered the Altenmarkt course despite clocking only the seventh-best speed of 125 kph (78 mph) at the fastest check.

Without the now-retired Vonn, the United States speed team is still looking for consistency.

Breezy Johnson, in her comeback race, Alice McKennis and Jacqueline Wiles finished bunched from 25th to 27th places. Johnson was making her first World Cup start in almost two years after a series of knee injuries.