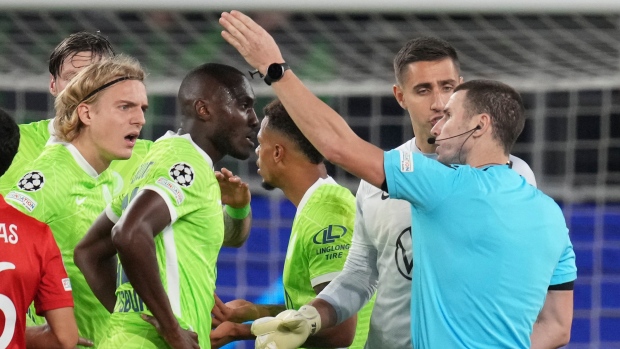 WOLFSBURG, Germany (AP) — Ivan Rakitić scored a contentious late penalty to earn a 1-1 draw for Sevilla at Wolfsburg in the Champions League on Wednesday.

Rakitić sent the goalkeeper the wrong way to equalize in the 87th minute, though the home team protested furiously that the penalty shouldn’t have been awarded. Wolfsburg midfielder Josuha Guilavogui was penalized after connecting with Erik Lamela after he cleared the ball. Referee Georgi Kabakov consulted video replays before pointing to the spot, then showed Guilavogui a second yellow card to leave the hosts with 10 men.

“I don’t know if today is the first day they’ve used VAR, if it’s all new for them. But that’s no penalty,” Wolfsburg midfielder Maximilian Arnold said. “I’m sorry, you can’t whistle for that in the Champions League.”

Guilavogui issued his first yellow card of the game in the first minute and went on to show 10 altogether – seven to the home team.

Wolfsburg hadn’t managed a shot on target until Renato Steffen opened the scoring from close range after Sevilla failed to clear in the 48th.

The first half was a stop-start struggle punctuated by the frequent blasts of Kabakov’s whistle.

Wolfsburg might have had a penalty in the 28th when Dodi Lukebakio went down under a potential foul from Diego Carlos, but a VAR check cleared the Sevilla defender.

Wolfsburg’s best chance of the half came from Arnold’s free kick that he fired over before the interval.

The second half continued in the same vein as the first after Steffen scored, with frequent interruptions and many niggly fouls. The yellow cards continued after Guilavogui was sent off with Wolfsburg forward Wout Weghorst booked for his reaction.

It was the German team’s first Champions League game at home for five years. New coach Mark van Bommel’s side had a good start to the season, despite being thrown out of the German Cup for using too many substitutes in its first-round game.

Wolfsburg won its first four Bundesliga games and drew its opening Champions League game at Lille 0-0, but Hoffenheim inflicted the first league defeat at the weekend.

Sevilla, on the other hand, is unbeaten in the Spanish league and was coming off two straight wins. The Spaniards were without suspended forward Youssef En-Nesyri.

Salzburg beat Lille 2-1 at home in the other Group G game. The Austrian team now leads the group with four points, ahead of Sevilla and Wolfsburg both with two points. Lille has one.