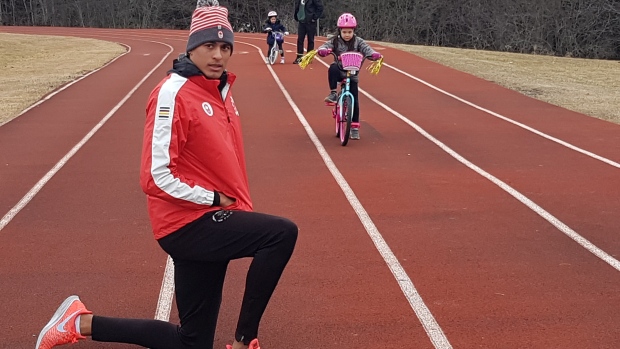 He’s mindful to give plenty of space to the seniors jogging around the same battered running tracks he’s using in Toronto’s suburbs. He’s mindful to stay alert for kids riding their bikes through local parks as he practis​es with javelins and a heavy workout ball.

LePage, a 24-year-old who competes in the decathlon, is among thousands of Olympic athletes in limbo these days, locked out of state-of-the-art training facilities and uncertain if the Tokyo Summer Games will begin on schedule.

“I’ve been creative,” LePage said in an interview on Thursday. I can’t train anywhere. Everyone is in quarantine. It’s a challenge to stay fit, but me and my coach are being creative and finding things to do. It’ll be like survival of the fittest for the Olympics.”

The coronavirus has laid waste to health care systems and battered businesses around the world, including those throughout the sports world. Yet the International Olympic Committee is resolute. The IOC says that it will hold the 2020 Summer Games in Tokyo as scheduled. The opening ceremonies are scheduled for July 24. The Paralympic Games are also scheduled to begin on time, for now, on Aug. 25.

As Olympic officials have doubled down, some former Olympic athletes have condemned the IOC for its stance.

Earlier this week, former Canadian Olympian Hayley Wickenheiser, a doctor in training, wrote on Twitter that the IOC’s stance was inhumane and insensitive.

LePage said he’s trying to avoid the polarized debate and still hopes to compete this summer in his first Olympics. He won the 2017 Canadian track and field championship and captured bronze last year in the Pan Am Games.

“I’m actually an introvert, so the lifestyle change hasn’t changed too much,” he said. “But obviously the training has changed a lot.”

In normal times, LePage would be working out daily at the Toronto Track and Field Centre at York University. But now, he’s making do with tracks and parks in and around Toronto.

“All of us athletes are obviously up in the air, but I think everyone is hopeful,” he said. “When the Olympics are close to happening, we’re all pretty upbeat and optimistic. I’m working hard and whatever happens, happens. Working out on older tracks ­– asphalt, hilly parks, no problem. I’ve been there before. It’s just like when I was younger.”

Canadian athletes aren’t the only ones impacted by the global coronavirus pandemic. Italy and Spain have been under national lockdowns, and other countries have closed their borders to international travel. U.S. President Donald Trump discouraged gatherings of more than 10 people on Monday, which led to the closure of many American Olympic training centres.

Pole-vaulter Alysha Newman is coming off a 2019 season in which she set a Canadian record of 4.82 metres at an Aug. 24, 2019 meet in Paris. The 25-year-old said she wants to compete in Tokyo – even if it means doing so in an empty stadium.

“The way I think, and it might be an athlete’s mentality, I’m like, ‘Okay, there’s no one in the stands. Oh my God. Let’s get some raging music going while we’re vaulting.’ Let’s get a band or a DJ in the Olympics who can perform while we’re competing. We could bring our Canadians. A little bit of Drake, some [Justin] Bieber, some techno music.”

Olympic wrestling gold medallist Erica Wiebe boarded a flight last week from Calgary to Ottawa around the same time that the NBA announced it was suspending its season. United World Wrestling Federation organizers decided the Olympic qualifications could proceed safely without spectators. On March 14, Wiebe wrestled five times to qualify for Tokyo.

“I’ve competed in a lot of crazy situations – buses breaking down, flights canceled, injuries, inter-team drama – and I thought I’d seen it all,” Wiebe said. “I’ve never had to deal with wrestling in the face of a global pandemic.”

Wiebe said she’s now in self-isolation in Calgary and hoping she can begin training with Danielle Lappage, her wrestling training partner, in a few weeks. The Canadian Olympic Committee hasn’t advised athletes whether they can resume training at some point with other athletes who also go through self-isolation.

“I wish I had a younger brother so I could get my training in,” Wiebe said. “I’ll be staying fit. I’m just riding a stationary bike in my home right now.”

Dr. Mark Loeb, an infectious diseases expert at McMaster University, said it’s unlikely that even those who self-quarantine for 14 days would be able to begin spending time with others afterwards.

“There’s so many questions,” Dr. Loeb said in an interview on Friday. “Are people truly alone? Do they have roommates? The idea is we don’t want people mixing and matching. The whole principle of social distancing needs to be continued as much as possible. If you see what’s happening in Alberta and B.C., people there are really sick and we’re going to see that everywhere in the country. We’re not there, but we’re going to be in the next two weeks.”

The Summer Paralympics are supposed to begin in Tokyo on Aug. 25, a few weeks after the Olympics wrap up. For housebound sprinter Marissa Papaconstantinou, household items have become stand-ins for weights and workout equipment.

“We thought everything was fine until it wasn’t,” Papaconstantinou said. “We’re not in our typical training environment, so we have to make do. I’m just trying to look at it as having fun with something a little different right now and try to make the best of it. We’ve been using suitcases, filling them up with weights and stuff.”

Papaconstantinou said she’s trying not to get too consumed by media coverage of the coronavirus pandemic.

“I’m taking care of the things I can control,” she said. “There’s a lot that we just don’t know.

"I’m in the 50-50 mindset right now. If people are responsible and practice social distancing, I think things will get under control. But if they don’t, it feels like it’s going in the opposite direction. It’s all really up in the air.”

For more on how Canadian athletes are training in uncertain times, watch CTV National News tonight.