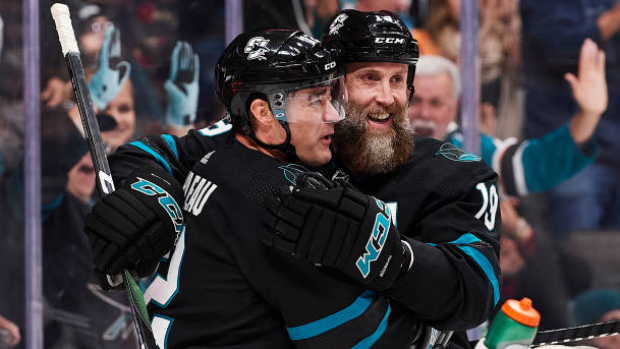 The San Jose Sharks are 11 points back of a playoff spot heading into action Monday night and centre Joe Thornton admitted he will have to consider waiving his no-move clause to join a contender if the Sharks can't turn things around. “I really need to think about that,” Thornton said, per The Mercury News. “Obviously, this little home stand is going to be important for our team. But I haven’t thought about it at all. I’m just trying to win games here and see how it goes.

“I’m still optimistic we can still make a run at it, I really am. We’ll have to see how these next couple weeks play out and then we’ll go from there.”

Thornton, 40, has two goals and 19 points in 50 games this season, his 15th with the Sharks. Currently playing on a one-year, $2 million contract, Thornton said he has trouble picturing himself in another uniform.

“I’m a Shark, through and through,” Thornton said. “I still have confidence in this group that we can make a little run.”

Patrick Marleau, also 40, returned to the Sharks in October on a one-year, $700,000 contract after two seasons with the Toronto Maple Leafs. He has eight goals and 17 points in 46 games this season and does not have any trade protection in his contract.

“Not even thinking about that right now,” Marleau said of a potential trade. “It’s about getting into the playoffs for us right now. That’s where my focus is. We’re going to have to put some good runs together to make that happen.”

Both Marleau and Thornton left the door open to playing another season next year. “I’m trying to take it pretty slow," Marleau said. "but I still feel like I could play another year. We’ll see how these next 32 games go.”

Marleau sits first in Sharks history in games played at 1,539 games, while Thornton is second with 1,084. Neither player has won a Stanley Cup.

Giving Up the Ghost?

Sam Carchidi of The Philadelphia Inquirer notes that the Flyers are 5-2 in their seven games since defenceman Shayne Gostisbehere underwent knee surgery and wonders if the 26-year-old has become expendable for a team in need of offence.

Gostisbehere, who could return to the lineup this week, has five goals and 12 points in 40 games this season while averaging 18:21 of ice time. He is currently listed at No. 7 on the TSN Trade Bait board.

Carchidi argues that the Flyers could use an offensive boost as they push for a playoff spot and points to New York Rangers All-Star Chris Kreider, Minnesota Wild forward Jason Zucker, Tyler Toffoli of the Los Angeles Kings,  Nashville Predators pending UFA Mikael Granlund, and Chicago Blackhawks forward Brandon Saad as potential options. He adds the Flyers may be forced to part with Gostisbehere over a draft pick in any deal in order to squeeze their new addition under the salary cap.

Gostisbehere is signed for three more seasons at a $4.5 million cap hit.

Ready for Another Run?

St. Louis Blues general manager Doug Armstrong stated Sunday that he's happy with his team's depth and doesn't expect to "be spending mid-to-late round draft picks on players just in case we have an injury."

When it comes to making a higher impact addition, however, Armstrong isn't ruling anything out.

“You’re always looking to see if you can improve your team, and if we can improve our team in our top six, I think we can take a look at that,” Armstrong said, per the St. Louis Post-Dispatch. “A lot of that will have to do on the updated medical information I get on (Vladimir Tarasenko).”

Tarasenko, the team's $7.5 million winger, has been sidelined since October due to shoulder surgery and while he's resumed skating, it remains unclear when he'll be ready for game action.

“My first choice would be to have Vladi playing sooner than later,” Armstrong said. “But medically, those shoulders - the surgery he had - it’s a fixed timeline of approximately six months. It’s not something you can really change.”

Tarasenko underwent the surgery on Oct. 24, putting his return date close to the end of April on a six-month timeline. Armstrong said that if the 28-year-old remains on that schedule, he could be swayed to make a deadline move.

“So getting Vladi back is our No. 1 thing, and if we don’t do that or we don’t believe he’ll be back for any regular-season games, we may look at adding some support into our top six,” Armstrong said.

Prior to the surgery, Tarasenko had three goals and 10 points in 10 games this season. He scored 33 goals and posted 68 points in 76 games a year ago, adding 11 goals and 17 points in 26 playoff games as the Blues won the Stanley Cup.