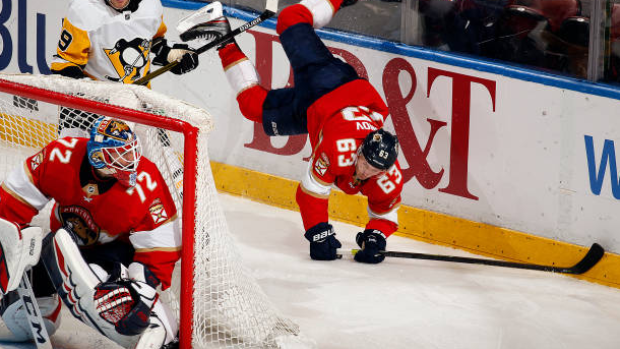 Bruce Garrioch of Postmedia believes the Panthers "could be on the verge of accepting reality" and entering the trade market as sellers. He points to pending unrestricted free agents Mike Hoffman and Evgeni Dadonov as forwards who draw interest from teams looking for offensive help before Feb. 24.

Garrioch has also suggested that Panthers general manager Dale Tallon would be open to moving forward Vincent Trocheck, but would likely have to take back a contract in deal to move his $4.75 million cap hit through 2021-22.

The Panthers will visit the San Jose Sharks on Monday with an opportunity to gain ground on the Maple Leafs, who they have two games in hand on.

The Buffalo Sabres are currently riding a three-game win streak, but with the team still on the outside looking in on the playoff picture, John Vogl of The Athletic reports speculation once again surrounds the future of defenceman Rasmus Ristolainen.

Vogl notes the Sabres currently have depth on the blueline and a need for scoring wingers, and Ristolainen knows his name is out there.

Ristolainen has five goals and 28 points in 59 games this season, his seventh with the Sabres.

Selected eighth overall by Buffalo in 2013, Ristolainen has never appeared in a playoff game. Vogl writes that the drought could end this year, just not with the Sabres. He believes the team could pair Ristolainen with a prospect in order receive a difference-making NHL-ready forward back in a deal.

Ristolainen is signed through 2021-22 at a $5.4 million cap hit, which is the highest among the Sabres' defencemen. Vogl believes fellow blueliners Rasmus Dahlin and Henri Jokiharju are untouchable ahead of the deadline, while Jake McCabe could be moved as a depth piece to a contender.

New York Rangers winger Chris Kreider remains No. 1 on the TSN Trade Bait board and though his representatives have been meeting with the team regarding a contract extension, Larry Brooks of The New York Post notes that it's unclear if any progress has been made.

UPDATE: TSN Hockey Insider Pierre LeBrun reported Monday that talks between the two sides haven't produced a path for an extension yet and Kreider remains in play on the trade market.

Sense is Kreider contract talks haven't produced a path yet... Still very much in play trade-wise. But I would also say normally in these situations each side would show their true hand about 2-3 days before the deadline contract-wise.

Brooks believes the Rangers would like to keep Kreider, but isn't sure the team is willing to go beyond six years or as high as $7 million on a new contract. He adds that even if the two sides could reach an agreement on terms, there may be problems coming to terms on a no-trade or no-move clause to ensure his place with the team moving forward.

Should the two sides be unable to find common ground over the next seven days, Brooks points to the Columbus Blue Jackets as a suitor, noting that former Ranger and current special assistant to Columbus general manager Jarmo Kekalainen, Rick Nash, attended the Rangers' 3-1 loss to the Boston Bruins on Sunday as a scout.

Brooks writes that the Blue Jackets could immediately insert Kreider into their top line and make an offer more enticing than the typical late first-round pick and a prospect to the Rangers. He believes the Blue Jackets could offer up pending restricted free agent Josh Anderson as part of the return for Kreider, a 25-year-old who could fill his shoes in the future.

Anderson has been sidelined since December due to a shoulder injury, and his future with the Blue Jackets has previously been put in doubt. In 26 games prior to the injury, Anderson had just one goal and four points after posting 27 goals and 47 points in 82 games last year. Listed at No. 38 on the TSN Trade Bait board, Anderson carries a cap hit of $1.85 million this season.