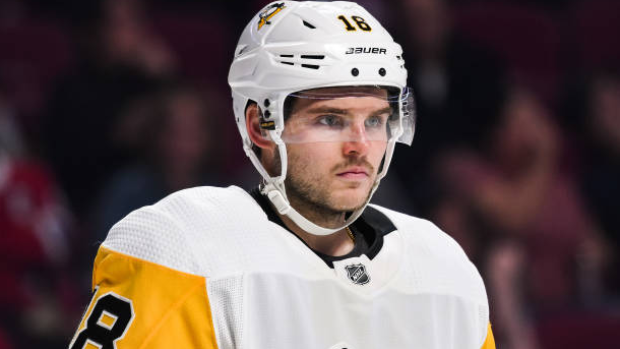 Alex Galchenyuk may be suiting up for his third team in a year, as TSN Hockey Insider Pierre LeBrun reports the Pittsburgh Penguins are looking to move the 25-year-old.

"That’s the plan. The Pittsburgh Penguins have started to talk to teams they’re willing to move Alex Galchenyuk, that’s the desire at this point," LeBrun said Thursday on Insider Trading. "I think the Penguins in return would look for either a draft pick or a bottom-six forward because that’s where he’s playing right now. He’s essentially a fourth-liner. It’s not a good fit for his skill set to be in that role. For whatever reason, it hasn’t worked out in Pittsburgh and the Penguins certainly could move him between now and the 24th."

The Penguins acquired Galchenyuk along with prospect Pierre-Olivier Joseph in the deal that sent Phil Kessel to the Arizona Coyotes last summer. He has four goals and 14 points in 34 games since joining the Penguins, while averaging 12:33 of ice time per game.

The 2012 third-overall pick has failed to top the 20-goal mark since scoring 30 goals with the Montreal Canadiens in 2015-16. He finished with 19 goals in 2017-18 with the Canadiens and again last season with the Coyotes.

TSN Hockey Insider Bob McKenzie adds that the Penguins are looking to be buyers ahead of the deadline to boost their offence, though he notes the team is not solely focused on the rental market.

"The No. 1 priority for the Pittsburgh Penguins and general manager Jim Rutherford right now is to replace Jake Guentzel in the lineup. Guentzel of course underwent shoulder surgery, he’s done for the year," McKenzie said. "They need to find somebody who can play with Sidney Crosby or Geno Malkin.  Now they have the available cap space, $6 million a year with Guentzel gone but obviously they need to make a commitment to spend those $6 million on a real player.

"Everybody assumes that the Penguins are going to dip into the winger rental market with names like Chris Kreider and Tyler Toffoli being premier amongst those possibilities but I think general manager Jim Rutherford is also looking at the possibility of making 'the old hockey trade,' that is trading for players with term, trading players off his roster, doing whatever is necessary to get that top six forward and I think he’d like to do it sooner rather than later. He likes to shop early before the deadline and I think that’s the priority right now. "

The Nashville Predators made a change behind the bench this week, but it doesn't appear that move will be followed by sweeping changes to the roster.

Predators general manager David Poile told the George Plaster Show on WNSR 560AM in Nashville that he continues to believe in the makeup of the team and does not expect to pursue rentals.

"I don't feel like we are going to be a big buyer whether we are in (the playoffs) or out," Poile said.

Poile pointed to special teams as an area where the Predators need to improve in order to make a push for the postseason. Nashville ranks 23rd on the power play, converting at 17.1 per cent and have the league's fourth-worst penalty kill at a 74.5 per cent success rate.

"I really think we are not that far off," Poile added, "but we need to make corrections in the system and how we are playing."

Finally, Poile said he hopes new head coach John Hynes will be able to get the most out of the team's top forwards.

"I don't want to be pointing the finger specifically, because there's lots of other areas, but our best players and our forwards have to be more productive," Poile said.

The Predators improved to 20-16-7 with Thursday's win over the Chicago Blackhawks, and now sit five points back of the Winnipeg Jets for the final wild-card spot in the Western Conference.

That's Hockey debated whether the Montreal Canadiens will be buyers or sellers at the trade deadline on Thursday. The Edmonton Oilers defeated the Canadiens 4-2 on Thursday, extending Montreal's winless skid to eight.

TSN Hockey Insider Pierre LeBrun said Thursday the Canadiens are expected to set their plans for the deadline later this month.

"Well first things first is they have their pro scouting meetings on Friday, that’s always important, every team does that this time of year ahead of the trade deadline," LeBrun explained on Insider Trading. "But really I’m looking at the week of Jan. 20. That’s when the Habs have a bye week followed by the All-Star break. I believe that’s when they’ll really decide their game plan for the rest of their season. Have they made hay in the six games that they have between now and then as far as getting back into the playoff race? If not, then it will be time to start selling pieces.

"By the way, one interesting piece could be Ilya Kovalchuk, who they just got off the scrap heap for $700,000. He’s looked okay so far. It’s early returns but if he keeps it up, could be a player they flip along with a few others, before the trade deadline."