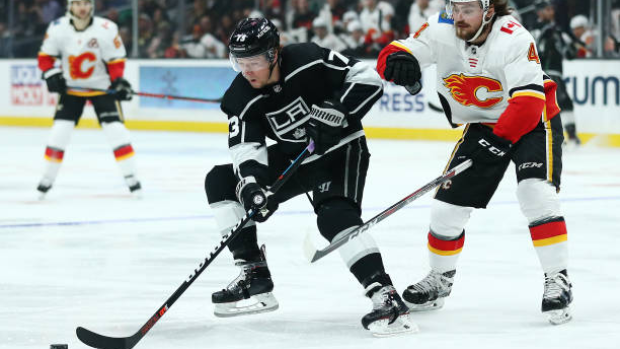 With the trade deadline exactly three weeks away, TSN Hockey Insider Pierre LeBrun listed six trades in The Athletic that could transpire before Feb. 24.

Looking at Canadian teams, LeBrun broke down deals that could make sense for the Calgary Flames and the Ottawa Senators.

In Calgary, LeBrun writes that he believes the team could pry Tyler Toffoli from the Los Angeles in a deal for a 2020 second-round pick, prospect Adam Ruzicka and a conditional fourth-round pick in 2021. He notes the Kings would have to retain 30 per cent of Toffoli's expiring $4.6 million cap hit to make the deal work, with the fourth-rounder contingent on Toffoli re-signing in Calgary.

The Flames have been in search of a right-handed top-six forward. Toffoli, 27, has 14 goals and 29 points in 52 games this season with the Kings, who LeBrun believes would be hard pressed to get a first-round pick back in any deal for him. Ruzicka, 20, was a fourth-round pick in 2017 and has seven goals and 15 points in his first AHL season this year.

With the Senators, LeBrun wonders if the team could package pending unrestricted free agents Jean-Gabriel Pageau and Ron Hainsey in a deal with the New York Islanders for a haul that includes a 2020 conditional second-round pick, a conditional third-round pick in 2021 and prospect Kieffer Bellows. The second-round pick would be elevated to a first if the Islanders advance past the first round of the playoffs, with Pageau playing at least 50 per cent of the games and the third-rounder being elevated to a second in Pageau re-signs in Long Island.

LeBrun notes that the Senators could still end re-signing either or both of Pageau or Hainsey, but both will be on the market if extensions aren't reached over the next few weeks. He adds the Senators would like a first-round pick for Pageau, but believes all first-rounders traded at this year's deadline could be conditional. As LeBrun writes, Isles general manager Lou Lamoriello is familiar with Hainsey from his time with the Toronto Maple Leafs, while Pageau's two-way game would fit in well with the Islanders.

Pageau, who carries a $3.1 million cap hit, has 20 goals and 32 points in 50 games this season, his eighth with the Senators who drafted him in 2011. Hainsey, signed at a cap hit of $3.5 million, has one goal and 11 points in 45 games this season. LeBrun notes that Hainsey does have a 10-team no-trade list, but he believes the Islanders are not on it.

Bellows, the 19th overall pick in 2016, has 16 goals and 24 points in 45 games this season with the AHL's Bridgeport Sound Tigers.

The Montreal Canadiens may have only signed Ilya Kovalchuk last month, but TSN Hockey Insider Pierre LeBrun believes the team won't just give him away at the trade deadline.

LeBrun reports that the belief from some teams is it will take no less than a second-round pick to convince the Canadiens to move him. He adds the Canadiens have discussed the merits of holding on to the 36-year-old because of the positive impact he's had on the team and adds the team may wait until the 11th hour to make their decision.

Belief from some teams that the price to rent out Ilya Kovalchuk from Mtl is no less than a 2nd RD pick; also hearing Habs have discussed merits of keeping him b/c of his positive impact both on ice/in the room. Still 3 weeks to go before Feb. 24 but might be 11th hour decision.

Signed early last month to a one-year, two-way contract that pays $700,000 in the NHL, Kovalchuk has five goals and 10 points since joining the Canadiens. He leads Montreal in goals over that stretch and sits second in points behind Tomas Tatar.

Kovalchuk currently sits at No. 3 on the TSN Trade Bait board.

The Columbus Blue Jackets are once again sitting on the edge of the playoff picture approaching the trade deadline this year, and while Aaron Portzline of The Athletic believes the team won't quite go all-in again, he expects general manager Jarmo Kekalainen to look to add offence.

The Blue Jackets are without their second- and third-round picks this year due to deals made ahead of last year's deadline, when they also traded their second-round pick in 2021. Portzline believes Kekalainen will be willing to part with later-round draft picks, but writes the team's first-round draft "will likely be treated as gold." He adds the team may be willing to deal Josh Anderson, Sonny Milano or Ryan Murray off their current roster in order to acquire help.

The Blue Jackets defeated the Montreal Canadiens on Sunday to move into third in the Metropolitan Division, owning a one-point lead over the New York Islanders, who have three games in hand, and a two-point lead over the Carolina Hurricanes and Philadelphia Flyers, who each have one game in hand.