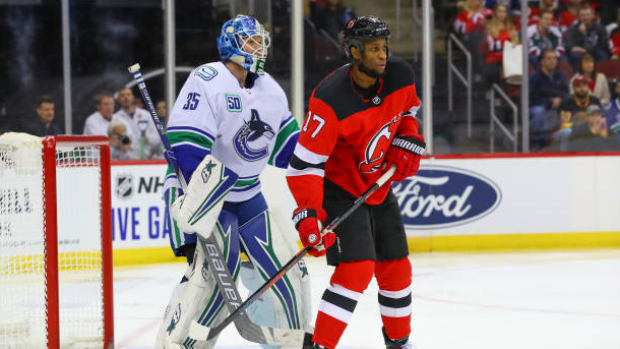 The Vancouver Canucks made a big move Monday night, acquiring Tyler Toffoli in exchange for forward Tim Schaller, prospect Tyler Madden, a 2020 second-round pick and a conditional fourth-round selection in 2022.

However, with the injuries piling up for the Canucks, TSN Hockey Insider Pierre LeBrun says Canucks general manager Jim Benning may strike again before Monday's deadline.

"They may not be done," LeBrun said Tuesday on Insider Trading. "I think a lot of people thought they might be, but the reality is Toffoli really comes in for Brock Boeser, who we now know could be out up to eight weeks, depending on being reevaluated. Now, in the meantime, Micheal Ferland has not been replaced. We know he's not playing hockey again this year and Wayne Simmonds, as we reported a few weeks ago is a player of interest still for the Vancouver Canucks and I do believe there's been dialogue there between the New Jersey Devils and the Canucks.

"Now, if not Wayne Simmonds, another player that could bring toughness to the Canucks lineup, that's a priority for Vancouver and they're going to try and get that done before Monday."

The Canucks initially announced Boeser would be reevaluated in three weeks, but Benning said Tuesday the injury was worse than originally thought when updating the timeline. The eight-week timeline puts the winger's return in early April, which TSN Senior Hockey Reporter Frank Seravalli notes could open the door for team to place him on long-term injured reserve for the remainder of the regular season and free his $5.875 cap hit ahead of the deadline.

Boeser and Leivo was the other way to attack the LTIR cap puzzle, as we hinted last night. With Boeser possibly out for the rest of the regular season, #Canucks have the same option to pursue with the "Kane Loophole" idea that we wrote about here -https://t.co/AcwIN2DMHe https://t.co/7QIbTKARLP

The Canucks are without their first- and second-round picks in this year's draft and Benning said Tuesday he's more likely to look to move a younger player if he strikes again before the deadline.

“I don’t foresee us trading any more picks, but if something makes sense, maybe, you know, with one of the young players that we feel we have enough depth at that position, we’ll maybe look to do something like that,” Benning said.

The Canucks, who host the Minnesota Wild on Wednesday, currently sit third in the Pacific Division, just one point back of the Edmonton Oilers for first.

The Ottawa Senators made their first trade ahead of the deadline on Tuesday, shipping defenceman Dylan DeMelo to the Winnipeg Jets for a third-round pick.

Prior to the trade, DeMelo was one of 10 pending unrestricted free agents on the Senators, and TSN Hockey Insider Darren Dreger reports Vladislav Namestnikov could be the next pending UFA on the move.

"Calls coming in to Ottawa on Namestnikov. I wouldn’t be surprised if he’s on the move in the days ahead," Dreger wrote Tuesday on Twitter. "He’s been very good for the Senators. Good two way forward."

Calls coming in to Ottawa on Namestnikov. I wouldn’t be surprised if he’s on the move in the days ahead. He’s been very good for the Senators. Good two way forward. https://t.co/WBi0Fc275i

The Senators acquired Namestnikov from the New York Rangers in October for Nick Ebert and a 2021 fourth-round pick. In 54 games with the team, the 27-year-old has 13 goals and 25 points.

He carries a $3.25 million cap hit for the remainder of the year, with the Rangers having retained $750,000 in the trade earlier this season.

As for pending free agent centre Jean-Gabriel Pageau, who's listed at No. 3 on the TSN Trade Bait board, Bruce Garrioch of Postmedia tweeted Wednesday he believes things still could go either way with the Senators either moving or re-signing the 27-year-old.

The most intriguing situation to watch in the next few days is the future of centre Jean-Gabriel Pageau. Still think this could go either way. #Sens.

The Montreal Canadiens have a decision to make on Ilya Kovalchuk after signing the veteran last month to a $700,000 deal for the remainder of the season.

Kovalchuk has six goals and 12 points in 20 games since joining the Canadiens and TSN Hockey Insider Darren Dreger reports Montreal is now deciding whether to move the 36-year-old or sign him to an extension.

"Ongoing discussions between the agent for Ilya Kovalchuk, J.P. Barry, and Montreal Canadiens general manager Marc Bergevin. Now the Canadiens are flirting with the idea of keeping Ilya Kovalchuk, but there is considerable trade interest as well," Dreger said on Insider Trading. "But, I will tell you this, based on some of the packages that have been presented in trades that have already happened prior to the trade deadline, Marc Bergevin has a specific price. It could be a second-round draft pick, plus, if he's going to move Ilya Kovalchuk.

"There's time, this thing could go right down to the wire and if he doesn't get his asking price, or the expected return, then I wouldn't be surprised if they hold on to Ilya Kovalchuk and take a shot at re-signing him after the deadline."

TSN Hockey Insider Pierre LeBrun, meanwhile, wrote in The Athletic that he believes the Canadiens will look to move Kovalchuk before Monday's deadline if both sides don't feel there's a fit on an extension. He reports Bergevin feels Kovalchuk is worth at least a second-round pick and, perhaps, an additional lower pick.

LeBrun points to the Colorado Avalanche as potential fit, as well as the Boston Bruins, but doesn't believe the Bruins will be willing to give up an asset for Kovalchuk after opting against signing him just a few weeks ago.

Running Out of Options?

Tuesday saw a run on defencemen in the trade market, with Brenden Dillon, Marco Scandella, Dylan DeMelo all being moved and the Vegas Golden Knights also closing on a deal for Alec Martinez.

Martinez, who could come off the Trade Bait board Wednesday if/when the deal becomes official, is currently the second highest-ranked defenceman on the list at No. 4. Once, he's moved, only Sami Vatanen of the New Jersey Devils (No. 2), Chicago Blackhawks defenceman Erik Gustafsson (No. 9), and Minnesota Wild blueliner Jonas Brodin (No. 19) will be left in the Top 20 on the list.

Of the 50 players on the current Trade Bait board, only 14 are defencemen including Martinez. Of those 14, only six are pending unrestricted free agents in Vatanen, Gustafsson, Detroit Red Wings defenceman Mike Green, Ottawa Senators veteran Ron Hainsey, Michael Del Zotto of the Anaheim Ducks and Buffalo Sabres defenceman Zach Bogosian, who was placed on waivers last week.

Here's the latest Trade Bait board: