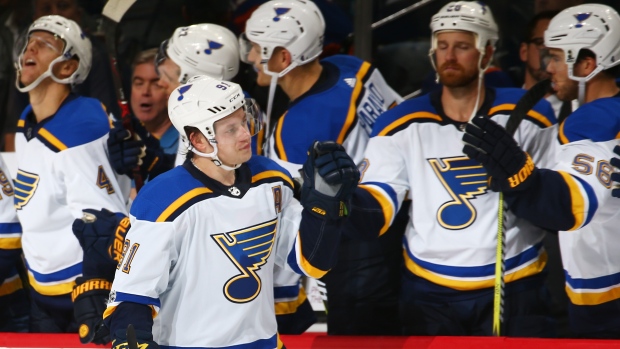 While many teams may wait until closer to the trade deadline to make decisions with their pending free agents, where are Wayne Simmonds and the Philadelphia Flyers headed?

Simmonds, who has 13 goals and 19 points in 43 games with a $3.975 million cap hit this season and TSN Hockey Insider Darren Dreger reports the team has not decided on their plans for his future.

Dreger also said Tuesday on Insider Trading that Simmonds could look for the Flyers to make their decision on keeping or trading him sooner rather than later.

"There are a handful of but you’re talking about Philadelphia Flyers forward Wayne Simmonds," Dreger said. "The Flyers haven’t made a decision yet on the direction they want to go with Simmonds. They know that he’s a big part of the culture in Philadelphia and has been for a long time, but he’s also a highly valued commodity.

"If you look at some of the contending teams - the Toronto Maple Leafs, Winnipeg Jets, and Calgary Flames from a Canadian perspective - why wouldn’t they have interest in Simmonds? He could help the power play and he’s a grit guy.

"Then you throw in the other element, I don’t think Simmonds wants to wait around for too long to determine his direction moving forward. I think we’ll be talking a lot more about Simmonds in the days and weeks ahead."

An 11-year NHL veteran, Simmonds, 30, has spent the past eight seasons in Philadelphia after being traded from the Los Angeles Kings in 2011. He posted back-to-back 30-goal seasons in 2016 and 2017 before scoring 24 goals last season.

The Flyers sit last in the Metropolitan Division this season and fired general manager Ron Hextall in November. Chuck Fletcher has since been named Hextall's replacement.

The St. Louis Blues may be a team to watch ahead of the trade deadline with names of top players - including Colton Parayko, Alex Pietrangelo and Vladimir Tarasenko - floating in the rumour mill.

If Tarasenko, a 30-goal scorer in each of the past four seasons, is available, Matt Larkin of The Hockey News believes there are five teams who should be all-in on the Russian winger.

Larkin lists the Carolina Hurricanes, Boston Bruins, Vegas Golden Knights, Edmonton Oilers and Buffalo Sabres as those five teams. He explains that the Hurricanes, Oilers and Sabres could all use scoring help, while the Golden Knights and Bruins are in win-now situations.

As Larkin points out, Tarasenko had no trade protection in his contract, allowing the Blues to take the best possible offer. He will, however, have a full no-trade clause kick in on July 1.

Tarasenko, who's signed for four more seasons at a $7.5 million cap hit, has 12 goals and 24 points for the Blues this season.

“I think L.A. and St. Louis are probably the two teams that intrigue me the most,” LeBrun told TSN Radio 1040 Vancouver. “I think both teams are listening on a lot of guys. I think there’s a lot of disappointment in St. Louis over where the Blues are.

“Doug Armstrong - I had another GM describe Doug Armstrong to me as an alpha today. In other words, he’s not going to sit on his hands and just accept where things are. So where that goes, I mean I think it’s still early in the process. Lots of time to play out here between now and the 25th of February.

“But I think the Blues are an absolute wild card in terms of having a GM who’s unafraid to make change if he’s pissed off. So yeah, that’s a team that is worth monitoring.”

Tarasenko was not among the three Blues players - Parayko (No. 1), Alex Steen (No. 12) and Jay Bouwmeester (No. 17) - on the TSN Hockey Trade Bait board ahead of the roster freeze last month.

Artemi Panarin, Jeff Skinner, Mark Stone and Matt Duchene are among the pending unrestricted free agents who become available closer to the deadline if they fail to reach extensions with their current clubs.

TSN Hockey Insider Pierre LeBrun provided an update on each of the four players during Tuesday's Insider Trading.

"Columbus Blue Jackets forward Artemi Panarin’s plan hasn’t changed. Panarin is going to meet with agent Daniel Milstein during the All-Star Break, where they’re going to get a clear indication of what the player wants to do and then they’ll let Columbus know," LeBrun said. "What’s interesting, of course, is the Blue Jackets may not necessarily trade Panarin even if he decides not to sign long-term. They may decide to make him a self-rental.

"Jeff Skinner – a lot of Sabres fans wondering where that’s going to go. His agent, Don Meehan, is playing phone tag this week with Sabres GM Jason Botterill and they plan to meet very soon.

"The two Ottawa guys, Matt Duchene and Mark Stone, could meet with the Senators next week. These meetings are starting to happen because teams have to know before they get into February and the trade deadline."

TSN Hockey Insider Darren Dreger said Tuesday that Feb. 25 is gearing up to be one of the busier trade deadline days in recent history.

Dreger said the divide between buyers and sellers could lead more trades than usual with fewer teams still debating their status.

Dreger and co-host Gord Miller agreed that the Columbus Blue Jackets, and Boston Bruins are looking for help in the Eastern Conference, while the Dallas Stars, Colorado Avalanche, Anaheim Ducks and, potentially, the Chicago Blackhawks could be buyers in the West for their playoff pushes. Finally, Dreger added that the Winnipeg Jets could make an addition similar to the move they made acquiring Paul Stastny last February to boost their chances of a Stanley Cup run.

Watch the full segment below.