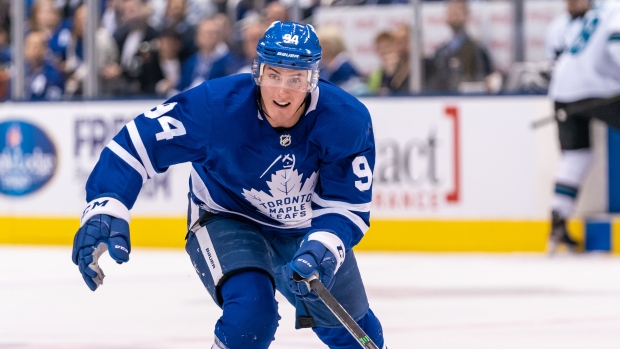 While the Toronto Maple Leafs have provided some stability to their blueline moving forward by extending Justin Holl and Martin Marincin, the future of pending unrestricted free agents Tyson Barrie and Jake Muzzin remain unknown.

TSN Hockey Insider Pierre LeBrun wrote Wednesday in The Athletic that he believes re-signing Muzzin remains the Leafs' top priority, but Barrie's resurgence may give the team reason for pause.

Barrie got off to a slow start this season under Mike Babcock, but has thrived since the November coaching change to Sheldon Keefe. After posting 12 points with a minus-14 through his first 28 games, Barrie has 12 points and a plus-6 in 19 games since the beginning of December.

“Yeah, Sheldon has been great for me,’’ Barrie said on Tuesday. “I love the guys here and I’m starting to love the city and get to know it a little better and getting more comfortable. I have no idea what my future holds, it’ll be interesting to see how it unfolds, but definitely, I’m a big fan of it here.’’

LeBrun expects Barrie to command a salary around $8 million on his next contract, which could be troublesome for the cap-crunched Maple Leafs. He carries a $2.75 million cap hit this season, with the Colorado Avalanche retaining half his salary in their July trade.

As for Muzzin, TSN Hockey Insider Bob McKenzie reported earlier this week that preliminary contract talks with the Leafs have begun.

“The next three weeks to a month, teams are assessing and I expect I’ll get some calls on Sven,” Benning said. “He’s having a good year and competing.”

Baertschi, who is currently sidelined with an ankle strain, was waived by the Canucks prior to the season and again last month after his six-game recall. He carries a $3.37 million cap hit through next season and Kuzma argues he could provide depth to a team dealing with injuries amid their playoff push.

As for players currently on the Canucks roster, Benning said he will keep a close eye on the standings as he decides how to proceed with the team's unrestricted free agents.

Tim Schaller, Chris Tanev, Oscar Fantenberg and goaltender Jacob Markstrom are all set to hit the open market in July for the Canucks, who are currently in the top wild-card spot in the Western Conference.

“Depending where we are at the deadline, we have to make decisions on guys who are UFAs,” Benning said.

The Canucks could get a boost to their lineup this month without making a move if either Brandon Sutter or Micheal Ferland return to the lineup. Benning said he'd like to see the team's best possible lineup in action before making any decisions.

“It would be nice going into the trade deadline with a healthy lineup, just to see what we’re looking like,” said Benning. “We’ll see where Sutter and Ferland are at in the next two weeks, so we’ll have a bit of time and then decide what to do.”

Washington Capitals general manager Brian MacLellan said Wednesday the team will consider all options as they look to load up for a another run at the Stanley Cup.

MacLellan admitted, though, that the Capitals, who sit first in the Eastern Conference, are unlikely to make a major move ahead of the deadline.

"As of now, I would assume we’re looking at depth pieces, but we’ll also pursue anything that we think might make us a better as a club,” MacLellan told NHL.com.

"As of now, I would assume we’re looking at depth pieces, but we’ll also pursue anything that we think might make us a better as a club.” https://t.co/nL4qxvGfxj

The Capitals, who - according to CapFriendly - have just $661,798 in cap space, signed centre Nicklas Backstrom to a five-year extension earlier this week that leaves them with just over $10 million in cap space left for next season. With goaltender Braden Holtby hitting free agency in July, MacLellan admitted that the team would need to clear space in order to keep their top netminder.

"It is tricky," MacLellan said. "Holtby’s a big part of our success as an organization and he’s in the mix with [Alex Ovechkin] and Nick as defining our organization. I think we had an open communication at the beginning of the year and then we were going to address it at the end of the year to see where we’re at with cap and possibilities or not possibilities. So, we’re going to play it out.

“We’re going to have to get creative if we want to accomplish signing Holtby with trades or find ways to create room.”