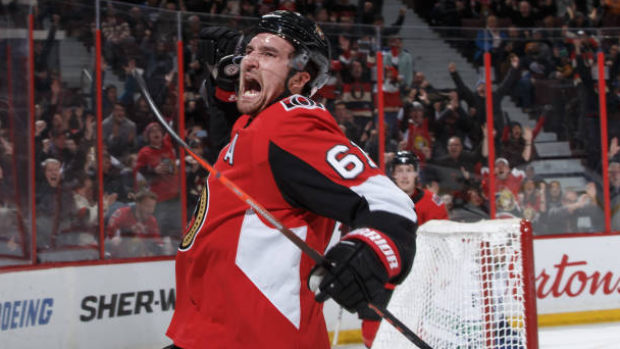 The clock is ticking for the Ottawa Senators to try to sign Mark Stone and Matt Duchene to extensions.

The team's two leading scorers are both slated to become unrestricted free agents in July and if the Senators can't get them locked up, the team may have consider moving both players at the deadline rather than risk allowing them to walk for nothing in the summer.

TSN Hockey Insider Pierre LeBrun said Wednesday that both players will be coveted on the rental market should they fail to reach deals in Ottawa. As LeBrun points out, Duchene could be one of the few centres available on deadline day, while Stone could be the biggest name on the market.

“The thing about Duchene is he’d be if not the only top-echelon centre available, certainly the top one anyway, if there’s more than one centre,” LeBrun told TSN Radio Ottawa 1200. “I’m with you, I think Stone is an absolute superstar, a stud.

“As I wrote today in my notebook in The Athletic, the Senators need a franchise win here. They need to absolutely re-sign Mark Stone. I feel like you have to re-sign Mark Stone. He’s younger and he's a Senators product - drafted, developed - and then Duchene would be a bonus, right. That’s the way I kind of looked at it. And if Stone doesn’t re-sign - and I really take Stone to his word that I think he is interested in doing just that, re-signing - but if negotiations don’t go well - I’ve got to tell you, I know teams are absolutely salivating at a shot at trading for him.

“And as I keep telling people, it doesn’t mean it’s going to end up being them if he’s available, but the Kelly McCrimmon connection to Vegas is so strong in terms of the relationship between Stone and McCrimmon (the Golden Knights assistant general manager was head coach of the Brandon Wheat Kings when Stone played there during his junior career). So I’d be shocked if (Golden Knights general manager) George McPhee didn’t try to get into it, although when Vegas tried a number of times on (Erik) Karlsson, it didn’t end up too well for them. So I don’t know if that has any impact on things.

“But never mind just Vegas, if Mark Stone becomes available - oh my goodness - the market’s beyond belief for him.

“But Duchene, because he’s a centre and he’s a heck of a player, he would have a ton of appeal, too. Those guys are so rarely available.”

Stone, 26, is on pace for a career-best season with 20 goals and 48 points in 44 games. He avoided arbitration with the Senators last summer, signing a one-year, $7.35 million deal. He was eligible to sign an extension on Jan. 1. Duchene is second on the team with 18 goals and 42 points in 37 games this season.

The Senators sit last in the Atlantic Division with 37 points in 44 games this season. If the season ended today, the team would own the second-best odds for the No. 1 draft pick in June, though their pick belongs to the Colorado Avalanche as a result of their 2017 trade for Duchene.

Columbus Blue Jackets goaltender Sergei Bobrovsky was listed at No. 20 on the TSN Trade Bait in December, but the likelihood of him being moved could be rising after Thursday’s team release.

General manager Jarmo Kekalainen announced Thursday that Bobrovsky would not dress against the Nashville Predators after he “failed to meet” certain “expectations and values that we have established for our players that define our culture.”

Bobrovsky is slated to become an unrestricted free agent on Canada Day and his future in Columbus has been murky since he declined to enter into extension talks with the team last July.

TSN Hockey Insider Pierre LeBrun wondered Thursday whether the two sides would elect for a split now, or allow this storm to pass.

“Bobrosvky and (Blue Jackets head coach) Tortorella haven't been best of buds all year / Now this. Pending UFA goalie. He's got a full NTC. Does he waive? Does Columbus want to trade him or let this simmer down?” LeBrun wrote on Twitter.

LeBrun later said a source informed him that Thursday’s release was not related to his relationship with Tortorella, but added it would be “shocking” to see the goaltender stay in Columbus after this season.

“Let’s deal with what we do know,” LeBrun told TSN.ca. “When the team tried to sign him to an extension this summer because he’s a UFA after this year, he didn’t want to go there. That’s fact No. 1.

“Fact No. 2, is that it’s apparent, I think, that him and John Tortorella haven’t always been on the same page. And Fact No. 3 is that he’s got a full no-trade clause and he’s UFA at the end of the year and it would be shocking to me that he has a future with his team beyond this year. So where it goes from here, we’ll see. “

Bobrovsky is 18-13-1 this season with a goals-against average of 2.86 and a .906 save percentage. He has struggled in the postseason during his career and has never advanced past the first round. His career playoff record sits at 5-14 with an .891 save percentage and a 3.49 GAA.

The Blue Jackets, meanwhile, sit third in the Metropolitan Division through 42 games with just a one-point lead over the New York Islanders, who currently sit outside the playoff picture but have a game in hand on Columbus.

The Buffalo Sabres could be in a similar contract situation to the Senators over the coming weeks with off-season addition Jeff Skinner, who is second in the NHL in goals this season and is also slated to hit the open market in July.

Skinner has flourished since joining the Sabres, posting 29 goals and 42 points in 43 games this season. TSN Hockey Insider Bob McKenzie said Wednesday the Sabres are expected to open extension talks with Skinner in the near future, but if things go south, there's a chance he could become available ahead of the trade deadline.

“Well, money talks. Ultimately that will tell the tale, to a point,” McKenzie said on NBCSN. “He likes the fit in Buffalo and the opportunity that he’s been given there that he didn’t feel like he was getting in his final days with the Carolina Hurricanes. As you point out, 29 goals in 43 games, second only to Alexander Ovechkin.

“Now, he’s making $5.725 million per year on the last year of his deal and he’s going to unrestricted free agency. With him scoring as many goals as he has, and the meter’s running and the numbers keep going up and up, it’s virtually guaranteed that he’s going to get well over $7 million a year on a long-term deal, and I wouldn’t be surprised if he starts looking in the more than $8 million range.

“So it’ll be him and the Sabres trying to sort that out. The belief is that Skinner’s agents are going to get together with Buffalo general manager Jason Botterill sometime over the course of the next week or two and see where things go.

“Now, if they don’t feel like they’re coming to an agreement and if Buffalo is out of the playoffs, they would at least have to consider maybe trading Skinner at the deadline.

“But, in a perfect world, they’re in a playoff spot and things are going reasonably well with Skinner that they would just hold onto him and try to make that playoff push.”

The Sabres currently occupy the top wild-card spot in the Eastern Conference, but have just a two-point cushion on the ninth-place New York Islanders. Skinner, meanwhile, is on pace to score 55 goals and 80 points this season - both of which would be career-bests.

Sharks in the Water

The San Jose Sharks appear to be a team to watch as general manager Doug Wilson attempts to improve his roster before the trade deadline.

Wilson, who acquired Evander Kane last February and added Erik Karlsson in the off-season, told Paul Gackle of The Mercury News that the Sharks are in win-now mode.

“The answer is probably yes,” Wilson told Gackle when asked if he's inclined add an impact player this season. “We do have a focus for this year.”

The Sharks are third in the Pacific Division, three points back of the Calgary Flames for first and own a 12-point cushion on the Minnesota Wild, who sit ninth in the conference standings. Wilson, however, is not ready to stand pat with his current roster.

“We have to get better,” Wilson said.

As Gackle points out, Wilson could have trouble swinging deals at the deadline due to the team's lack of high-end draft picks. The Sharks traded their 2019 first-round pick for Kane a year ago and sent their 2020 first-round pick, along with their second-round pick this year, to the Ottawa Senators for Karlsson. Wilson pointed to the team's prospect pool as potential assets to make a deal in the coming months.

“We have all these young players," Wilson said. "Look at all the guys leading the junior leagues in scoring. People like those players.”

While it's unclear exactly what is on the general manager's wish list ahead of the deadline, Wilson said he won't be looking for goaltending help despite the struggles of Martin Jones and Aaron Dell.

“Look at their history,” he said. “We’ve seen Jones in the playoffs. He’s just getting into his prime.”