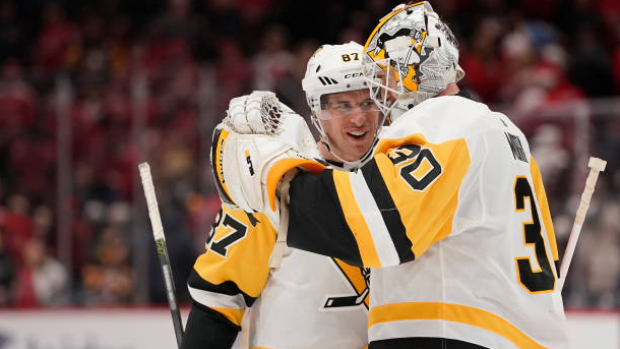 The Pittsburgh Penguins made a big splash on Monday, acquiring Jason Zucker from the Minnesota Wild for Alex Galchenyuk, Calen Addison and a conditional 2020 first-round pick.

Penguins general manager Jim Rutherford had previously stated his desire to acquire a winger to help replace the injured Jake Guentzel and paid a premium to add a player with significant term to help extend his team's Stanley Cup window.

“I’m really excited about our team,” Rutherford told the Pittsburgh Post-Gazette on Monday. “Not only for this year. It’s a team that can be good for a few years. To add another player like this, not only for the run, but that we will keep him for another three years. It’s an exciting deal.”

The Penguins gave up one of their top prospects in Addison, a 19-year-old defenceman who played for Canada at this year's world juniors. Rutherford admitted that it stung to deal Addison, a second-round pick in 2018, but noted the team is focused on winning in the present, not the future.

“It bothers me when we trade a young player like [Calen] Addison because we like him,” Rutherford said. “We know he’s going to play [in the NHL]. But you have to give somebody to get what you want. That’s the way it works.

“By the time that pick and Addison are ready to play in the league, our window of opportunity may be closed. This is an opportunity to get a player to help us win now.”

With the Penguins' focus on winning in the immediate, Rutherford wouldn't rule out making another trade before the deadline on Monday.

“I don’t know,” he said. “The nice thing about making this deal now is we’ll get a look at our team for about 10 days. We’ll see how things fall into place. We’ll see where we’re at at that time. We’ll have to see how [injured defensemen Brian] Dumoulin and [John] Marino are coming along, when they’re going to return. Then we can make a decision at that time.”

The Penguins enter play Tuesday four points back of the Washington Capitals for first in the Metropolitan Division with two games in hand. Pittsburgh will host the Tampa Bay Lightning on Tuesday.

The Detroit Red Wings appear to be clear sellers ahead of the trade deadline, but Ansar Khan of MLive notes that some of the players the team was hoping to deal are struggling as Feb. 24 approaches.

Bernier has a 12-14-2 record this season with a .911 save percentage and a 2.82 goals-against average. Khan points out, however, that after a slow start, the 31-year-old has a 7-5 record since Dec. 12 with a .940 save percentage and a 1.97 GAA.  He wonders if a Stanley Cup contender could sway the Red Wings to move the goaltender for a second-round pick ahead of the deadline.

Should the Red Wings move Bernier, though, the team will likely need to find two goaltenders in the off-season with Jimmy Howard currently playing on an expiring deal. Bernier is signed through next season at a $3 million cap hit.

Athanasiou broke out of a 19-game goal drought on Sunday with two goals against the Boston Bruins. The 25-year-old has seven goals and 21 points in 40 games this season after posting 40 goals and 54 points last year.

Khan wonders whether the Red Wings will hold on to Athanasiou for the remainder of the season in hopes he will recoup some of his value before looking to move him as a restricted free agent this summer. He is currently in the final season of a two-year, $6 million deal and is one of eight players on the Red Wings scheduled to become an RFA in July.

Athanasiou is ranked at No. 9 on the TSN Trade Bait Board, while Red Wings centre Valtteri Flippula is also listed at No. 30 with one year left his on contract.

While the Edmonton Oilers have been linked to big-name rentals such as Jean-Gabriel Pageau, Kurt Leavins of The Edmonton Journal believes general manager Ken Holland is unlikely to make a big splash before the deadline.

Leavins believes Holland will be unwilling to part with either a first-round pick or top prospect ahead of Feb. 24, which could take the Oilers out of the running for Pageau, Chris Kreider or Mike Hoffman. Instead, Leavins thinks the Oilers could pursue Blake Coleman of the New Jersey Devils, noting the asking price could be Jesse Puljujarvi and a third-round pick or prospect such as Dmitri Samorukov or William Lagesson.