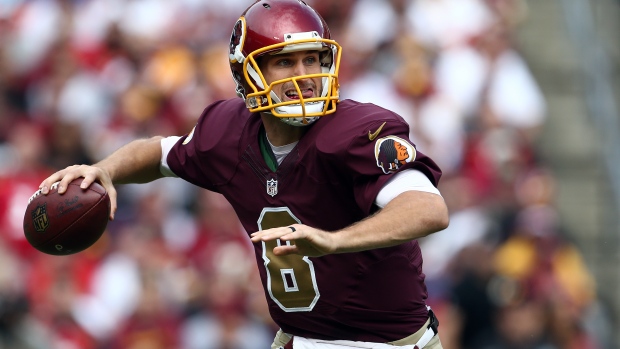 LANDOVER, Md. - There were plenty of reasons for Kirk Cousins and the Washington Redskins to believe this game was not going to go their way.

They trailed by 24 points in the second quarter, a deficit the team never had overcome in a victory. They had been outscored by 43 points in third quarters so far. Cousins hadn't thrown more than one touchdown pass in any game this season.

At halftime, coach Jay Gruden — who had pronounced Sunday's matchup against the Tampa Bay Buccaneers a "code red" situation — lit into his players.

Something finally clicked. Cousins completed three second-half TDs, including the go-ahead score to Jordan Reed with 24 seconds left, and the Redskins came back to stun the Bucs 31-30 for the largest comeback in franchise history.

"Everybody was pretty upset. Jay was livid," left tackle Trent Williams said about a loud halftime locker room. "You rarely every see him in that state. But he was on the gas."

Cousins finished 33 for 40 for 317 yards, the trio of scores and zero interceptions. He also ran for an 8-yard touchdown in the second quarter for the first points for the Redskins (3-4), making it 24-7 after two quarters.

"It was a good lesson: Just keep playing and you never know what can happen," Cousins said.

There were those wondering whether his time as the starting QB might be coming to an end. But he got a pair of 3-yard scores in the third quarter — one to Ryan Grant, the other to Reed — sandwiched around an onside kick, to make things interesting.

There is a clear pattern to Washington's season so far: In the team's three wins, Cousins has not thrown a single interception; in the four losses, he has been picked off twice each time.

This was the fourth-year QB's second last-minute comeback win this season, both at home. Cousins led the Redskins past the Philadelphia Eagles in Week 4.

This time, trailing 30-24, Washington got the ball at its 20 with a little less than 2 1/2 minutes left in the fourth quarter. Cousins threw on every play, going 9 for 11 for 75 yards, capped by the 6-yard toss to Reed on a slant.

The tight end, who missed last week's game with a concussion, was lined up to the right, with four receivers split off to the left.

Cousins saw Reed covered 1-on-1 and found him easily.

"I'm pretty sure there are fans, or people all over the world that are Redskins fans, that probably were thinking, like, 'Here we go again. Something bad's going to happen,'" defensive tackle Terrance "Pot Roast" Knighton said. "But everyone on the sideline had the confidence that we were going to score and win the game."

Jameis Winston, the No. 1 overall pick in this year's draft, was 21 for 29 for 297 yards and two first-half touchdowns that helped Tampa Bay (2-4) build its massive lead. Doug Martin ran for 136 yards on 19 carries, but it was 5 yards he didn't gain that might have swung the outcome.

With 4 minutes remaining, Martin broke off a 49-yard run up the right sideline and appeared set to score, until cornerback Bashaud Breeland tracked him down, catching up to make the tackle at the 5. Breeland injured his right hamstring on the play and left the game.

"They score there," Gruden said, "the game's over."

Instead of a TD that could have made it 34-24, Tampa Bay wound up settling for Connor Barth's third field goal of the game and a six-point lead.

Cousins was able to erase that.

"All losses really hurt, but you have some that really leave a deep scar," Bucs coach Lovie Smith said. "And this is definitely one of those."

Notes: Until Sunday, the Redskins had won three games after trailing by 21 points, most recently in 1999. ... The Bucs were called for 16 penalties for 142 yards. ... Bucs WR Mike Evans caught his first TD pass of the season, a 40-yarder on the team's third play from scrimmage.