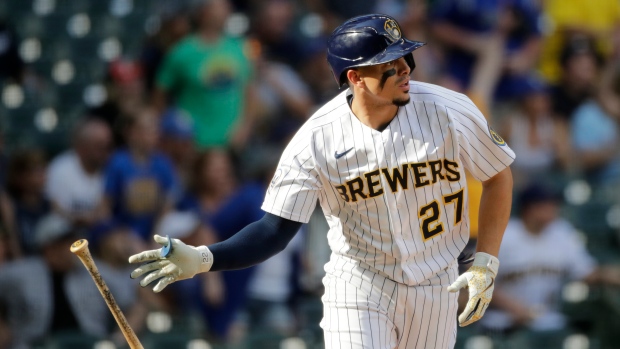 The fantasy landscape could soon be shifting as Major League Baseball has announced that it will be finalizing rules and enforcement protocols for pitchers using foreign substances. These changes are scheduled to begin within the next couple of weeks.

Using substances such as pine tar has been banned for years, but umpires and players largely ignored the rule. However, the recent dramatic rise in pitcher spin rates and the perceived advantage that pitchers hold has led to an outcry from position players.

This rule change could have an effect on pitchers who rely on foreign substances to create a higher spin rate and increase their velocity.

As enforcement begins, managers should keep a close eye on sudden dips in velocity within their staff as a sign of who could be affected most without the extra assistance.

Managers who need some extra help with their roster before the new rules come into effect can consider these options rostered in fewer than 50 per cent of ESPN leagues.

McCann signed a four-year, $40 million contract with the Mets in the off-season and did not endear himself to the Citi Field faithful early on.

Over his first 30 games with the Mets, the 30-year-old hit just .202 with one home run and eight RBI. As the Mets continued to struggle with multiple injuries, the catcher was forced to make four starts at first base in place of Pete Alonso The change seems to have brought McCann out of his slump.

In 10 games since making his appearance at first base, the former all-star is hitting .306 with four home runs, 11 RBI, and six runs scored. The Mets’ offence as a whole is starting to improve and McCann should reap the benefits as he is now hitting third in the lineup, between Francisco Lindor and Alonso.

It has been a tale of two seasons for France. Over his first 22 games, the Mariners’ infielder was hitting .325 with 13 RBI and 17 runs scored, making him one of the most valuable waiver wire adds over the first month of the season.

Over his next 14 games, France fell off of a cliff, collecting just three hits (.063 batting average) and one RBI over that span. A subsequent stint on the injured list may have cleared France’s head as he has come back looking like the player he was in April.

In 12 games since being reinstated, France has hit .326 with five doubles and seven RBI. The power he showed in Triple-A (27 HR in 76 games) hasn’t manifested in the majors yet. However, France is making hard contact nearly 40 per cent of the time and his current home run to fly ball rate of six per cent should normalize and become closer to his career mark of 10.5 per cent.

Managers looking for a middle infielder should add France before his power shows up as the weather starts to get warmer.

The 25-year-old was traded to the Brewers on May 21 and the change of scenery has had an immediate effect on his production. While he was hitting under the Mendoza Line with the Rays, Adames has immediately become a key part of the Brewers lineup, slashing .269/.356/.481 with three home runs and 11 RBI in 15 games.

The shortstop had also been moving up in the lineup, hitting second in five of the past eight games. Adames hit 20 home runs in his last full season with the Rays and could hit at the same pace playing more games in the pitcher-friendly confines of American Family Field.

Skubal is one of the Tigers’ top prospects and has been flashing his potential after a difficult start to the season. Skubal did not throw more than 88 pitches in any April start and was used as a long reliever on two occasions.

Now fully stretched out, the 24-year-old has surpassed 90 pitches in each of his past six starts, compiling a 3-3 record with a 3.09 ERA and a whopping 14.1 strikeouts per nine innings.

He has struck out at least eight batters in four straight starts and five of his past six. He’s also shown he can deal with tough lineups, having allowed just one run over his past two starts against the White Sox and Yankees.

The young hurler might have trouble earning wins on the last-place Tigers. However, Skubal will provide managers with plenty of strikeouts and solid-to-great ratios moving forward.

Gonsolin was placed on the injured list during the first week of the season due to shoulder inflammation and will be activated to make his season debut this week against the Pittsburgh Pirates.

Gonsolin will need a couple of starts to get fully stretched out, as his rehab starts in Triple-A were cut short due to a stomach issue. However, when he builds up to full strength, Gonsolin will be a great source of wins, ratios, and strikeouts

Feyereisen was acquired from the Brewers as part of the Adames trade and has immediately been trusted in high-leverage situations. In six appearances with the Rays, the reliever has collected three saves while allowing just a single run.

The 28-year-old will generate plenty of strikes and good ratios, even if he is not the sole closer in Tampa Bay.

The Rays will continue to use a committee in the ninth inning but Feyereisen has seemingly overtaken Diego Castillo as the player to be rostered for saves. Managers in leagues that score saves and holds need to roster the newest Ray immediately.