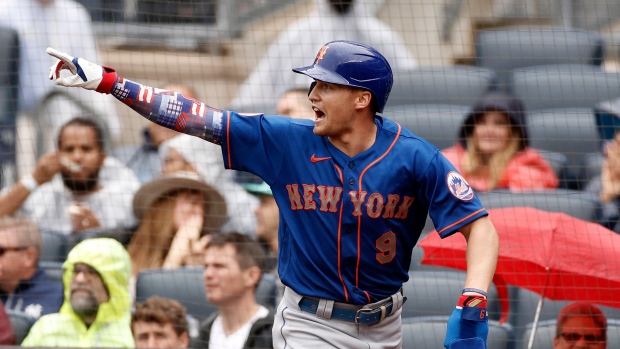 The Chicago White Sox optioned catcher/designated hitter Yermin Mercedes to the minors on Friday night and recalled infielder Jake Burger, whose long journey to the major leagues was filled with injuries and setbacks.

After being drafted by the White Sox 11th overall in 2017, Burger sustained two separate tears of his left achilles tendon and then suffered a bruised heel while rehabbing the second rupture, leading to more missed time. During the COVID-19 pandemic, Burger opened up about his battles with depression and anxiety. Without a minor-league season in 2020, Burger’s Triple-A debut this season was his first taste of organized baseball in three years, and the 25-year-old has not disappointed.

In 42 games with Triple-A Charlotte, Burger hit .322 with 10 home runs and 36 RBI, earning his call to Chicago. He continued his feel-good story in his White Sox debut, going 2-for-4 with a double and a run scored.

Burger will need to fight for at-bats in the White Sox lineup but he has the prospect pedigree and power profile to make an impact right away.

If he’s available, Burger is worth a speculative pickup to see if his hot start can continue.

Here are six other players rostered in fewer than 50 per cent of ESPN leagues that can provide immediate help for managers.

Nimmo made his long-awaited return to the Mets lineup after missing two months with a small ligament tear in his left index finger. In his first action since May 2, the outfielder made an immediate impact, going 3-for-6 with two runs scored.

In 22 games this season, Nimmo is slashing .333/.435/.444 with one home run and two stolen bases. Nimmo occupies the leadoff spot for the Mets and his biggest contributions will come from runs and his ratios.

The 28-year-old has elite on-base skills, as he has a career .392 OBP and has not had a single season mark below .375 since first season in the majors. As long as Nimmo can remain healthy, he will be a solid outfield option for fantasy managers, especially those in OBP leagues.

Since his arrival, the formerly punchless Brewers’ offence has scored 203 runs, second most in the majors. The offensive explosion resulted in an 11-game win streak for the Brew Crew that finally ended on Sunday afternoon.

Adames has made noticeable improvements since the trade, improving his walk rate by four per cent and decreasing his strikeout rate by 13 per cent. He is also making hard contact more often and is chasing fewer pitches outside of the zone.

As long as Adames is hitting in the middle of a scorching Brewers lineup, he deserves a roster spot in all fantasy leagues.

Rodgers has struggled with injury throughout his short career, most recently dealing with a strained hamstring that kept him out of the lineup until May 21.

Since returning to the lineup, the 24-year-old has looked like the top prospect he was billed as since being drafted third overall in 2015. In 36 games, Rodgers has slashed .276/.356/.457 with five home runs and 19 RBI. He’s been hot over the past two weeks, having racked up five multi-hit games with a .313 average.

Rodgers has been used as the cleanup hitter in the Rockies’ lineup and should be a solid contributor of counting stats, especially when he plays at home in Coors Field.

The 31-year-old starter had a rough start to the season but has put it together over his past four starts. In four starts spanning 23.1 innings, Stripling has allowed just six earned runs, good for an ERA of 2.31, while striking out 24 batters.

He’s averaged just under six innings per start during his solid run, whereas he averaged fewer than five innings per start prior. Stripling has only allowed more than two runs in a start once since May 24 and is sporting an ERA of 2.35 over those eight appearances.

The former Los Angeles Dodger might not be the most exciting option, but has found a groove as a full-time starter and should be in line for plenty of wins with the Blue Jays’ offence providing him healthy run support.

Smyly is another “boring” option who has put himself on the fantasy radar with a solid string of starts.

The veteran has earned a win in his past four starts while allowing just three earned runs across 22.1 innings pitched. Smyly is striking out a career-worst 20.6 per cent of batters, but has found success by decreasing the amount of hard contact he has allowed.

Despite the relatively low strikeout numbers, Smyly has gotten batters to swing at more pitches outside of the zone, which has contributed to his success.

His next start will come against the Pittsburgh Pirates and their struggling offence which has scored the fewest runs in the league this season. At the very least, Smyly has earned consideration as a streamer against a weak lineup.

The Reds closer carousel continues to turn and it appears that the veteran Hembree has earned his chance in the ninth inning. The 32-year-old has earned the past two saves chances for the Reds, successfully converting both.

Hembree’s 5.26 ERA is less than impressive and it’s surprising that he has been given save opportunities on the heels of a nine-game stretch between May 18 and June 13 in which he allowed 12 earned runs (including six home runs) over 9.1 innings.

He has been better in his recent appearances, pitching four consecutive scoreless innings, while allowing just two hits and striking out seven. Hembree is a very risky option, as his performance over the course of the season has been inconsistent at best. However, as long as Reds’ manager David Bell trusts him in the ninth, he will provide value for fantasy managers.