In case you haven’t heard, the Toronto Blue Jays called up pitching prospect Alek Manoah last week, and he was all anyone could talk about.

Making his debut against the Yankees in New York, the 23-year-old righty was dominant, tossing six shutout innings, allowing just two hits and two walks while striking out seven. Manoah showed excellent command of his four pitches and kept the Yankees off balance all day.

It’s not very often that a rookie pitcher gets the call and immediately lives up to the hype. The disappointing 2021 debuts of Seattle Mariners pitcher Logan Gilbert and Kansas City Royals’ prospect Daniel Lynch may have left a sour taste in some manager’s mouths. However, Manoah is more than worth the attention he's been getting.

As a rookie, he will have his hiccups, but Manoah is worth an immediate add in any of the 43 per cent of leagues he is still available.

If he’s not available, here are six other players who can be had in more than 50 per cent of ESPN leagues.

O’Neill recently missed time due to a fractured finger but has returned to the Cardinals’ lineup with a bang. In four games since being activated off the injured list, the Canadian has seven hits in 14 at-bats, including three home runs and three doubles, while driving in seven runs.

This type of hot hitting won’t continue, but O’Neill has been an excellent option all season long. Since returning from his first IL stint in late April, the 25-year-old has hit 10 home runs and stolen four bases. Most importantly, the free-swinging outfielder has hit for an average of .314 over that span.

O’Neill was covered in Week 5 of Covering the Bases, because his Statcast page indicated he could be in the midst of a breakout season. Since then, O’Neill has improved across the board, and is now in the 100th percentile of the league in barrel percentage and expected slugging percentage. He has also upped his exit velocity, expected batting average, and sprint speed to elite levels. 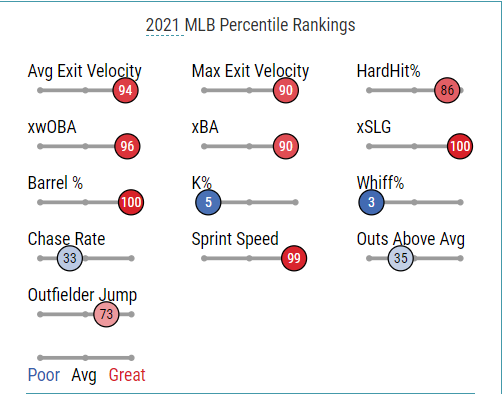 As long as he remains healthy, O’Neill should be rostered in every fantasy league as an elite power threat who can contribute double-digit steals.

Garver burst onto the scene in the 2019 season when he hit 31 home runs in 93 games. Combined with a .273 average, it looked like Garver was going to become one of the premier hitting catchers in all of baseball. Unfortunately, he crashed down to earth in 2020.

In 23 games last season, Garver slashed a horrid .167/.247/.264 with just two home runs. His strikeout rate ballooned from 24 to 45 per cent while his hard-hit rate, and home run to fly ball ratio plummeted.

Garver has bounced back this season, as he has hit eight home runs and driven in 17 over 38 games. His metrics have bounced back, not quite to the level of 2019, but more than enough to make him a productive member of the Twins’ lineup.

Catcher is a notoriously shallow position and anyone producing the type of power Garver is capable of should be rostered.

Zach McKinstry, 2B, OF, Los Angeles Dodgers (30.5 per cent rostered)

Cody Bellinger was not the only Dodgers’ outfielder to come off of the injured list over the weekend. Utilityman McKinstry was also inserted into Saturday’s lineup after missing more than a month with a strained oblique.

Despite not having a set spot in the lineup, McKinstry played most days due to his versatility, making appearances at both corner outfield spots, second base, and third base. He started in right field in his first game off the IL.

The 26-year-old is hitting .286 with three home runs and 14 RBI in 26 games this season. He won’t offer a lot of power but his ability to hit for a good average will help him drive in plenty of runs in an elite Dodgers’ lineup.

McKinstry is the quintessential fantasy bench-bat that managers can plug into multiple positions and expect solid production.

Alzolay quietly posted another strong start against the Cincinnati Reds on Friday, tossing 5.2 shutout innings while striking out six, earning his third win of the season.

Over his last six starts, Alzolay is now 3-2 with a 3.12 ERA and 34 strikeouts over 34.2 innings. He hasn’t just done this against weak competition, as he has held the offences of the Los Angeles Dodgers, Atlanta Braves, St. Louis Cardinals, and Reds to a combined six runs in four starts.

His next start will come on Wednesday against the San Diego Padres. It’s a tough test for the young starter but if he is able to navigate that start with a reasonable amount of success, he should be added in all leagues.

Bubic has been pitching like a top-tier option since entering the Kansas City Royals’ rotation on May 18. The 2018 first-round pick has tossed 17 innings across three starts, striking out 12 while allowing just two runs.

Bubic won’t rack up a ton of strikeouts, but he has been able to find success by limiting home runs while holding opponents to a .186 batting average. The 23-year-old generates a ton of ground balls (50 per cent) and has done an excellent job limiting hard contact. This season, Bubic has allowed a 23.8 per cent hard-hit rate, which would rank fourth among qualified starters.

He is due for some regression, as a BABIP of .228 would be tough to sustain for someone who pitches to contact. However, as long as Bubic can continue to induce ground balls and limit hard contact, he will be a decent end-of-the rotation option for fantasy managers.

Kelly’s number’s don’t look good on the surface, but his recent performance has warranted a look in deeper leagues.

The 32-year-old’s ERA sits at 4.84 but has been weighed down by a pair of poor starts in early April. Since he allowed six runs in his third start of the season, Kelly has posted a 3.46 ERA over his next seven starts, not allowing more than three runs in any of those appearances.

An xFIP of 3.86 supports that his current performance has a good chance of continuing. His numbers during the shortened 2020 season (2.59 ERA, 0.99 WHIP) show he can be a solid contributor for fantasy teams.

Kelly is a great short-term option for streaming conscious managers, as he will start Monday against the injury-depleted New York Mets’ lineup.