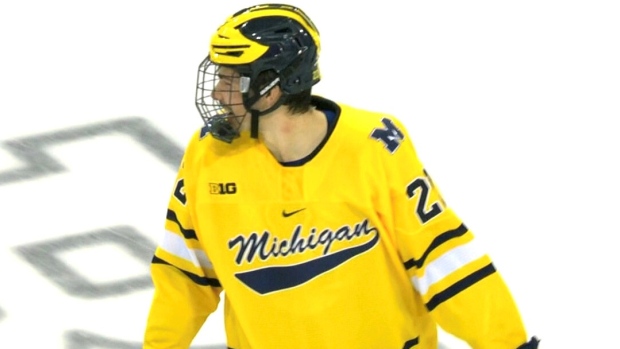 The 6-foot-6, 213-pound blueliner had an impressive freshman season (three goals and 16 points in 26 games) in Ann Arbor, then stepped up to play a significant role to help Team Canada win a gold medal at the IIHF World Championship.

“Power has superb hockey sense, superior size and strong puck skills,” said TSN Director of Scouting Craig Button. “He has all the attributes to be a No. 1 defenceman at the NHL level.”

While Power seems destined to hear his name called at first overall by the Buffalo Sabres on July 23, he appears to be leaning towards returning to Michigan to get the full NCAA experience after a strange pandemic year.

Button says another year of college hockey will be good for Power’s development.

“I don’t think any player in this draft class is ready to be a significant contributor in the NHL next season,” Button said. “That’s not a bad thing. Alexis Lafreniere didn’t make a huge splash during the 2020-21 season. Jack Hughes, Kaapo Kakko and Kirby Dach didn’t in 2019-20. It takes time.”

Clarke had five goals and 15 points in 26 games for Nove Zamky, then had seven points in seven games for Canada at the IIHF U18 World Championship.

“Clarke has a game that is predicated on creativity, imagination and boldness,” Button said.

Wolverines centre Matty Beniers sits third in Button’s rankings, coming off a season where he was a point-per-game player (10 goals, 14 assists in 24 games). The 6-foot-1, 174-pound pivot also played a major role in helping Team USA to a gold at the World Juniors despite being the youngest player on the roster.

Djurgardens left winger William Eklund (No. 4) is the first of three Swedish players in Button’s top eight, joined by Lulea goaltender Jesper Wallstedt (No. 7) and Frolunda defenceman Simon Edvinsson (No. 8).

“It’s another really strong prospect class from Sweden,” Button said. “Eklund has the same kind of brilliant hockey sense Henrik Zetterberg played with. Wallstedt has the same goaltending style as Henrik Lundqvist and Edvinsson’s skating is in the mould of Victor Hedman.”

U.S. National Team Development Program defenceman Luke Hughes (No. 5) is poised to join brothers Jack and Quinn as a first-round selection. The youngest Hughes brother is also the biggest (6-foot-2, 187 pounds) and has committed to Michigan for next season.

The first round of the 2021 NHL Entry Draft will begin at 8 p.m. ET on Friday, July 23, with rounds two through seven being held on July 24.