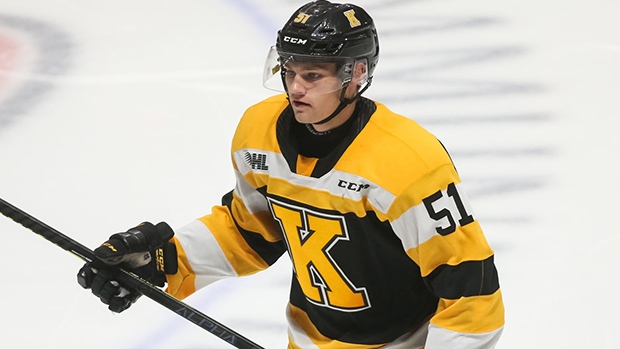 Plenty of daylight exists between Shane Wright and the rest of the field as the race to be the next first-overall pick in the National Hockey League begins.

The Kingston Frontenacs centre is the top prospect in the September edition of Craig’s List ahead of the 2022 NHL Draft, and TSN Director of Scouting Craig Button says it’s not even close.

“There is not a player in the 2022 draft who combines the high degree of skill, IQ and competitiveness that Shane possesses,” Button said. “He would have been the first pick in the 2021 draft if he was eligible. His ability to play the game at an exceptionally high level not only separates him on the ice, but it is also a separator in the 2022 draft.”

Wright certainly has a resume befitting a No. 1 pick. The Burlington, Ont., native was granted exceptional player status by Hockey Canada for the 2019-20 Ontario Hockey League season, was the first pick in the 2019 OHL Priority Selection and was named Rookie of the Year after scoring 39 goals and 66 points in 58 games as a 16-year-old.

The COVID-19 pandemic prevented Wright from having a sophomore season with Kingston, but he did captain Team Canada to a gold medal in May at the IIHF World Under-18 Championship in Texas. Despite going more than a year between competitive appearances on the ice, the 6-foot, 188-pound pivot still had 14 points in five games.

“Shane’s game is complete. There is not an area of the game where he doesn’t make an impact,” Button said. “When we draw comparable types of games or players, Wright’s game would resemble that of Boston Bruins’ star Patrice Bergeron – and not a lower-case Bergeron but an upper-case version.”

If Wright does hear his name called first next July 7 in Montreal, he will be the first OHL player taken with the top pick since the Edmonton Oilers selected Connor McDavid of the Erie Otters in 2015.

The group trying to close the gap with Wright includes Logan Cooley (No. 2), a centre for USA Hockey’s U-18 team, Russian left wing Ivan Miroshnichenko (No. 3) and Finnish right wing Brad Lambert (No. 4), who is playing for JYP in the SM-liiga this season.

“Cooley is a very skilled, creative centre who creates offence through superb passing,” Button said. “He’s a dangerous shooter as well. He projects as a No.1 centre.”

Miroshnichenko (6-foot-1 and 185 pounds) is playing for Omskie Krylia in Russia’s VHL this year. Button said his game is all about reading opportunities and taking full advantage.

“Miroshnichenko is a determined and hungry goal scorer,” Button said. “He’s got a terrific shot, but he’s also got a bull-like attitude in carving out space and driving the net.”

Lambert, the son of Canadian former minor-league player Ross Lambert who was raised in Finland, was the youngest member of that country’s entry at last year’s World Juniors.

“He’s an excellent skater with the ability to attack in multiple ways to create opportunities,” Button said of Lambert. “He’s very comfortable in different areas of the ice, which makes him difficult to mark. He has the potential to be a high-end winger.”

“Slafkovsky is a strong two-way centre who plays well in all areas and has an imposing physical stature,” Button said. “Yurov is a powerful winger with excellent sense and skills. He’s very challenging to defend as he can beat you with his mind, his physical ability or his skill – all at the same time if necessary.”

Also in the top 10 is Winnipeg Ice forward Matt Savoie (No. 8), who had 21 goals and 38 points in 34 games while on loan with the Dubuque Fighting Saints of the United States Hockey League last season. Savoie, who was the top pick in the Western Hockey League’s 2019 Bantam Draft, also played in 22 games for the Ice in 2019-20 season as a 15-year-old, tallying seven assists.

“Savoie is fast and quick in both his feet and his hands,” Button said. “He can beat you multiple ways, either with his shot or with a pass. He opens up well to get the puck on the move and he can execute at a high pace.”

Rounding out the top 10 are left-shot Canadian defenceman Kevin Korchinski of the Seattle Thunderbirds (No. 9) and right-shot Czech blueliner David Jiricek, who is playing for HC Plzen in the Czech Extraliga this season.

All statistics listed below are from the 2020-21 season or the 2021 IIHF World Under-18 Championship.