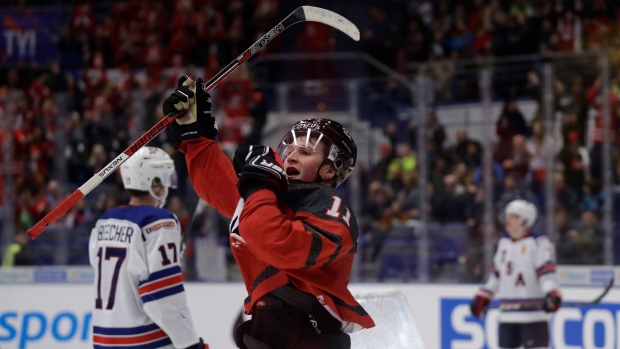 Rimouski Oceanic left wing Alexis Lafreniere has strengthened his hold on the title of hockey’s best prospect, with his 112-point regular season further evidence that he belongs atop the latest edition of Craig’s List ahead of the 2020 NHL Draft.

With leagues around the globe cancelling the remainder of their seasons due to the COVID-19 pandemic, TSN Director of Scouting Craig Button’s latest ranking serves as an end-of-the-season evaluation.

There will be one more Craig’s List before the 2020 Draft, whenever that may be. The NHL has postponed the draft from its original June 26-27 dates in Montreal.

The latest list is heavy on northern talent, with Canadians taking five of the top six spots and 18 of the 31 first-round slots. Lafreniere going first overall would end a drought for Canadian prospects that stretches back to 2015, when the Edmonton Oilers selected Connor McDavid with the first pick.

The shortened season was a stellar one for Lafreniere, who averaged more than two points per game with 35 goals and 77 assists in 52 Quebec Major Junior Hockey League (QMJHL) contests and overcame a knee injury to help Canada win gold at the World Juniors.

“He has excelled from his first game in junior and there is nothing to indicate that he won’t be a contributor in the NHL from the outset,” Button said. “I believe he’s more than capable of being a 60-plus-point player as a rookie.”

Lafreniere burst onto the scene during the 2017-18 season, becoming the first 16-year-old since Sidney Crosby in 2003-04 to score more than 40 goals. He has more than delivered on the hype ever since – both in the QMJHL and when representing his country internationally.

“He doesn’t rely on one area of the game to be successful,” Button said. “He can make plays, he can score, he can play in traffic and is determined to be in the guts of the action. With his physical maturity, he’s more than ready to handle the challenges and rigours of the NHL.”

Tim Stutzle, an 18-year-old centre/left winger who had 34 points in 41 games for Adler Mannheim in the Deutsche Eishockey Liga this season and turned heads at the World Juniors for Germany, is second on Button’s list.

“He’s pure excitement and plays the game in a similar fashion to Patrick Kane,” Button said. “He’s quick on his skates and has a fast mind. He’s extremely confident and manages to do things in the game offensively that are completely unexpected. Stutzle is a very difficult guy to try to defend.”

Towering Sudbury Wolves centre Quinton Byfield, who accumulated 32 goals and 82 points in 45 Ontario Hockey League games this season, sits third on the list. But Button says the 6-foot-4, 215-pound Byfield has the most physical upside in the entire 2020 class.

“Byfield is the one player who has shown he could eventually surpass Lafreniere,” Button said. “He has the hands and offensive ability that remind you of Evgeni Malkin and the determination to be a 200-foot player like Anze Kopitar.”

Saginaw Spirit forward Cole Perfetti lands at No. 4 on the list. Coming off a season of 111 points (37 goals) in 61 games, Perfetti has excellent hands and is comfortable playing in tight areas.

“Perfetti’s hockey IQ is off the charts,” Button said. “He’s brilliant in every way. He won’t catch your eye with a lot of flash, but he has tremendous substance.”

The first defenceman on the list is Erie Otters blueliner Jamie Drysdale at No. 5. Button says the electrifying 5-foot-11, 172-pound Drysdale has turned himself into a complete, well-rounded defenceman.

“This process usually happens – if it happens – when a player is much older and in the NHL,” Button said. “Jamie has done it seamlessly over the past two years. I see a player who has command and confidence in every situation. He has the potential to be a top-pairing defenceman at the NHL level.”

A pair of Ottawa 67’s teammates are at No. 6 and No. 8, with right wing Jack Quinn two spots ahead of Austrian centre Marco Rossi.

“Quinn is the best goal scorer available in this draft,” Button said. “He’s capable of gearing up and gearing down with his speed to create space. He reminds me of David Pastrnak in so many ways. Rossi is an excellent playmaker with the vision and creativity to make something out of nothing. He has a style of play similar to Nicklas Backstrom.”

Sandwiched between the Ottawa forwards at No. 7 is Russian goaltender Yaroslav Askarov, who Button considers the best goalie prospect he’s seen entering a draft since Carey Price in 2005.

“Yes, he had his struggles at the World Juniors, but what doesn’t change is his tremendous skill and ability,” Button said. “He has completely dominated his age level time and time again, and he’s been dominant in the age group immediately ahead.”

Button’s top 10 is rounded out by Swedish right wing Lucas Raymond (No. 9), who skated for Frolunda this season, and Chicoutimi Sagueneens centre Hendrix Lapierre (No. 10), who had his season derailed by concussion issues. Lapierre played just 19 games, collecting two goals and 17 points. His last game was Nov. 21.

“Lapierre is the wild card of this draft,” Button said. “I should probably have him higher based on his potential, because I think he’s a top-five player if he can return to full health. He’s the best two-way player in the draft.”