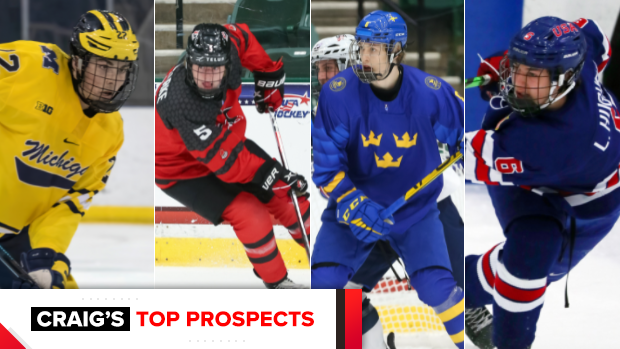 This year’s prospect class is shaping up to be a boon for teams looking for blueline help, with defencemen holding down the top four spots on the latest edition of TSN Director of Scouting Craig Button’s rankings ahead of the 2021 NHL Draft, scheduled for July 23.

Owen Power, the towering 6-foot-5-1/2, 213-pound Michigan Wolverines defenceman, is Button’s top prospect available after scoring three goals and 16 points in 26 games at the NCAA level. And his talents will be showcased again later this month as he'll play for Team Canada at the IIHF Men's World Hockey Championship in Latvia.

Owen Power and Cole Perfetti among the non-NHL players Team Canada will be taking to Latvia for the Men’s World Championship.

Barrie Colts defenceman Brandt Clarke, who spent this season with HC Nove Zamky in the top Slovakian professional league while the Ontario Hockey League was on pause during the pandemic, comes in second in Button’s rankings.

Clarke, a right-shot defenceman who is 6-foot-2 and 185 pounds, helped Canada win gold at the under-18 men's hockey championship in Frisco, Texas with two goals and seven points in seven games.

Swede Simon Edvinsson (No. 3) and American Luke Hughes (No. 4) round out the run on defencemen atop Button’s rankings.

Defencemen have never been selected No. 1 through 4 in the draft. The closest to that was in 1995 when Bryan Berard, Wade Redden and Aki Berg went No. 1-2-3. In 2008, centre Steven Stamkos went first overall, followed by blueliners Drew Doughty, Zach Bogosian and Alex Pietrangelo.

“Edvinsson is an outstanding skater,” Button said. “He has the brains and competitive spirit necessary to be a top-pair, big-minutes defenceman at the pro level.”

Hughes, the younger brother of top-10 picks Quinn (seventh overall to the Vancouver Canucks in 2018) and Jack (first overall to the New Jersey Devils in 2019) had 34 points in 38 games for the USA Hockey National Team Development Program Under-18 team this season and has committed to Michigan for next year.

Hughes is expected to resume skating later this month after having surgery in March to repair a foot tendon lacerated by a skate cut.

“Luke Hughes is the all-around competitively solid defenceman who contributes in all areas,” Button said.

Despite the numerous obstacles presented by the COVID-19 pandemic over the past year, Button said players and scouts found a way to make the best of a tough situation.

“It was a season that challenged players and NHL scouting staffs alike,” he said.  “It was a very different process for players to show their abilities and potential and for scouts to assess those skills and attributes. But players have taken advantage of their opportunities and scouts have been able to gain a very strong sense of confidence in what the players offer.”