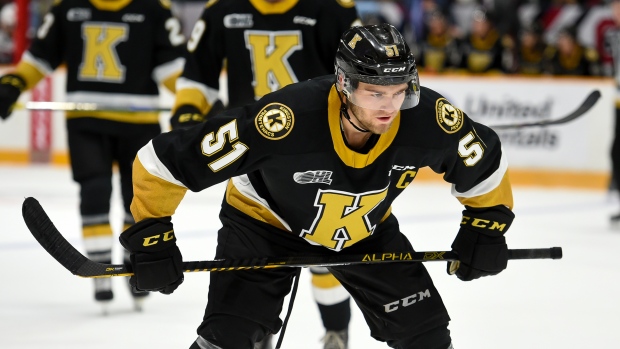 For the first time since 2020, the puck is set to drop at the CHL/NHL Top Prospects Game.

Forty players eligible for the 2022 NHL Entry Draft from across the Ontario Hockey League, Quebec Major Junior Hockey League and Western Hockey League will suit up in Kitchener, Ont., split between Team Red and Team White.

Watch the CHL/NHL Top Prospects Game on Wednesday, March 23 at 8 p.m. ET/5 p.m. PT on TSN5 and streaming on TSN.ca, the TSN App and TSN Direct.

While some scouts have voiced concerns about Wright’s performance this season, TSN Director of Scouting Craig Button firmly has the Burlington, Ont., product as No. 1 on his 2022 NHL Draft list.

“Stories about his demise were greatly exaggerated,” said Button. “He’s the best player.”

Joining Wright on Team Red is Winnipeg Ice centre Matthew Savoie, who is seventh in WHL scoring with 28 goals and 76 points in 56 games and is No. 12 on Button’s list.

“I think he’s really rounded out his game, said Button. “I think by becoming more of a playmaker, he’s become an even better goal scorer. One has helped the other. He’s an offensive forward. My question is, will he be better as a centre or as a wing? I like him on the wing because I like him to get the puck on the move.”

“I think Luca Del Bel Belluz is just a really well-rounded two-way player,” said Button. “He’s competitive. He might be Anthony Cirelli. Really like the way he plays. His cup spills over with competitiveness.”

On the other side of the ice on Team White, Saginaw Spirit defenceman Pavel Mintyukov is a big riser on Button’s list, jumping from No. 20 at midseason to No. 7.

“He is good. Excellent skater in every single regard. The agility in tight spaces, turning. He’s got this magnificent mind where he’s in the moment and he’s also two steps ahead. Brilliant. Hockey sense five out of five.”

Joining Mintyukov on the blueline for Team White is Owen Pickering of the Swift Current Broncos, who has nine goals and 32 points in his first full WHL season.

“Pickering is another kid, lanky, lots of physical maturity,” said Button of the 6-foot-4 defenceman. “He’s raw right now but you watch him play and I just sit there and think about him in three years’ time. I just think whoa, he’s got abilities that are pretty impressive.

“Everything in Owen Pickering’s game, all I see is development. All he needs is time. I don’t see any inherent weaknesses in that kid’s game.”

Another player making a jump in Button’s rankings is Moose Jaw Warriors centre Jagger Firkus, who like Pickering, is also playing in his first full WHL season. The Irma, Alta. native was 5-foot-5 and 125 pounds when he was selected in the fourth round at the 2019 WHL Bantam Draft. He is now 5-foot-10 and 154 pounds.

“This is a player teams want to see,” Button said of Firkus, who has 33 goals and 75 points in 60 games this season. “There isn’t a ton of background on him.

“He’s a savvy, savvy player. He knows how to get open and when to get open. He’s not anywhere near a level of physical maturity where he can afford to get into unnecessary physical battles.

“He’s got what I call real slick, sly ability. His shot is deceptive, and he can be moving and get the shot off on the move. As he’s moving, he can snap it if he sees the opening.”

In net for Team White will be Prince George Cougars goaltender Tyler Brennan, who Button calls the best goalie in the draft.

“I think he’s got some real good qualities,” said Button. “I watch him play, from a skill, athletic, technical and mental point of view and I see somebody that’s just got really strong potential to be a No. 1 goalie in the NHL.”

Two players Button identifies as having the potential to grab scouts’ attention and rise up the draft rankings are Sudbury Wolves centre David Goyette and Seattle Thunderbirds winger Reid Schaefer.

“He’s got some real good offensive capabilities,” he said of Goyette, who is No. 17 on Button’s list. “Smart around the net. He plays in that inner slot area.”

Goyette has 27 goals and 61 points in 57 games with the Wolves this season.

As for Schaefer, Button currently has him ranked in the second round but is impressed by his blend of size (6-foot-3 and 214 pounds) and skill (29 goals and 48 points in 57 games).

“He’s big and strong,” Button said of the Thunderbirds winger. “He just keeps getting better and better. He’s assertive, he’s got skill.

“When you’re 6-foot-3 and you can move and you’re showing this type of progression, you’re now looking at a player who gets the interest of teams. Big time.”