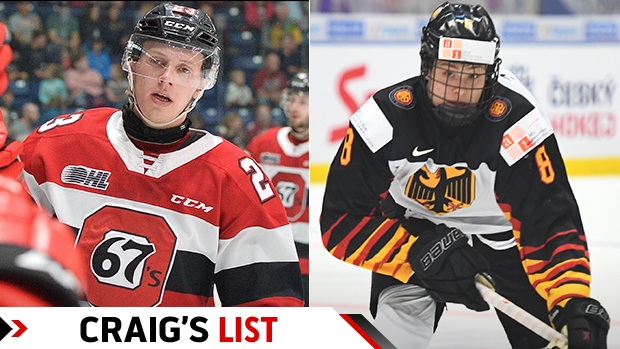 Alexis Lafreniere remains the clear top prospect in hockey, but a strong showing at the World Juniors has helped propel German winger Tim Stutzle into a tie for second with Sudbury Wolves centre Quinton Byfield in the January edition of Craig’s List ahead of the 2020 NHL Draft in Montreal.

Stutzle, an 18-year-old left winger who has five goals and 18 assists in 26 games this season for Adler Mannheim in the Deutsche Eishockey Liga, turned heads with a dynamic performance for his country over the holidays. He jumps five spots on this ranking after sitting at No. 7 in November.

“He’s the type of player who makes you believe something exciting is going to happen every time he’s on the ice,” said TSN Director of Scouting Craig Button. “He’s got elite skill and his game is full of dynamic qualities.”

Button believes that the 6-foot-1, 187-pound Stutzle, who had five assists in five games at the World Juniors, is a natural centre at the next level.

“He’s got lightning-quick feet and hands,” Button said. “His offensive game reminds me of Patrick Kane.”

Byfield struggled to make an impact at the World Juniors in a limited role for Team Canada, but Button said that shouldn’t hurt the 6-foot-4 ¼, 215-pound centre’s draft stock. Byfield, 17, has 25 goals and 63 points in 33 games for the Wolves this season.

“Quinton is going to be a very good player who will only get better as he matures,” Button said. “The big centre is always coveted and it should be no different with Quinton. He has the attributes to be a productive NHL player for a long time.”

Saginaw Spirit sniper Cole Perfetti (23 goals and 69 points in 40 OHL games this season) sits at No. 4 on the list, while 18-year-old Austrian centre Marco Rossi of the Ottawa 67’s has jumped six spots from No. 11 in November  to land at No. 5.

“Rossi plays with a quiet drive,” Button said. “He pushes the play and doesn’t get deterred by any challenge. He’s highly skilled and very creative.”

Jamie Drysdale of the Erie Otters is the top blueliner on Button’s board, coming in at No. 6. The 5-foot-11, 172-pound defenceman has seven goals and 35 points in 31 OHL games this season.

“He’s the best defenceman available in this draft,” Button said of the 17 year old. “He’s learned how to be an impact player in all three zones. That evolution has been quite impressive for a player who was always a dynamic offensive defenceman.”

Russian goaltender Yaroslav Askarov, 17, drops three spots from Button’s November rankings to sit at No. 7 after looking overwhelmed during the World Juniors.

“Askarov is still the best goalie I’ve seen entering a draft since Carey Price,” Button said. “He wasn’t at his best at the World Juniors, but his skill level and attributes are undeniable. It’s just one tournament. The previous six international tournaments he played in ended with Askarov helping his team win a medal.”