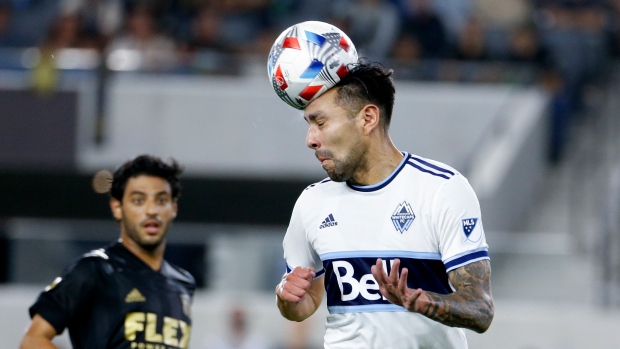 SANDY, Utah — The Vancouver Whitecaps bid adieu to their temporary home in Sandy, Utah, with a 2-2 draw against Minnesota United Saturday.

Cristian Dajome had both goals for the 'Caps (3-7-6), including a stoppage time penalty kick that preserved a point for Vancouver.

The Colombian attacker leads the Whitecaps with eight goals on the season.

"What I'm happy with him, is he doesn't get rewarded with goals just because of the quality he has, it's also the work rate that he puts in and how he helps the team without the ball and how he’s committed with the team," said head coach Marc Dos Santos. "He's a great teammate and he's rewarded for that."

Dajome's first of the night came in the 36th minute off a corner. Midfielder Russell Teibert collected an assist on the play.

But United's Ethan Finlay stopped Vancouver from taking a lead into halftime, scoring in the 45th minute with help from Emanuel Reynoso.

The midfield grew congested in the second half, Dajome said, and Vancouver didn't respond well.

"We didn't pressure, we didn't show for the ball," he said through a translator. "I think it was part of the fact that we were ready to get the ball up top, but we just never got it. Sometimes when the ball would be applied, which we didn't really look for that pass forward and we didn't make it quick enough."

With time ticking down on the clock and Minnesota up 2-1, Finlay fouled Dajome in the box, gifting Vancouver a penalty kick.

Dajome blasted a shot into the right side of the net as United 'keeper Tyler Miller dove in the opposite direction.

Dajome hobbled out of the penalty area before collapsing on the field and being surrounded by his teammates.

The 27-year-old said he was hurt when Finlay fell on top of him during the foul, but called the injury "a slight thing."

United held a 11-10 edge in shooting with four shots on target, compared to three for the Whitecaps.

Vancouver's Thomas Hasal saved two of the four shots he faced. Miller made one save for United.

Saturday marked the last match the 'Caps will play at Rio Tinto Stadium in this season.

The team started the year stationed south of the border due to pandemic-related border restrictions, but announced last week that it will play the rest of this season's home games at B.C. Place in Vancouver.

First, though, the Whitecaps will embark on a road trip, facing the Galaxy in L.A. on Aug. 8. Minnesota will host the Houston Dynamo on Aug. 7.