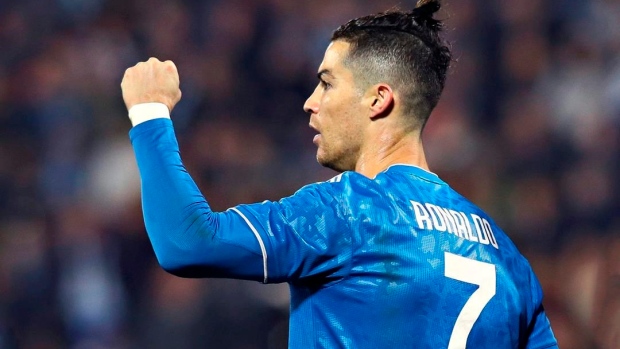 MILAN — Cristiano Ronaldo shows no sign of slowing down as he marked his 1,000th official match by scoring a record-equaling goal to help Juventus win 2-1 at Spal in Serie A on Saturday.

Ronaldo scored for an 11th straight league game, matching the Serie A record set by Gabriel Batistuta in 1994 and equaled by Fabio Quagliarella last season.

Ronaldo also hit the crossbar with a free kick late on and had an early goal disallowed.

Aaron Ramsey doubled Juve’s lead in the second half before Andrea Petagna got Spal back into the match with a penalty.

Juventus visits Lyon in the first leg of the Champions League round of 16 on Wednesday.

Serie A leader Juventus extended its advantage to four points above Lazio, which visits Genoa on Sunday. Third-place Inter Milan is also playing a relegation-threatened team on Sunday as it hosts Sampdoria.

Spal remained firmly bottom of the table, eight points from safety, after a fifth successive defeat.

Ronaldo thought he had given Juventus the lead in the fifth minute but it was ruled offside on video review.

However, the Portugal forward did get on the scoresheet six minutes from the break, rushing in at the far post to volley Juan Cuadrado’s cross into the roof of the net.

It took Juventus until the hour mark to double its lead when Paulo Dybala sent in a delightful through ball for Ramsey, who lifted it above Spal goalkeeper Etrit Berisha.

Spal reduced the deficit nine minutes later after Juventus defender Daniele Rugani fouled midfielder Simone Missiroli. After a lengthy wait and the use of video review, a penalty was awarded and Petagna fired it into the bottom right corner.