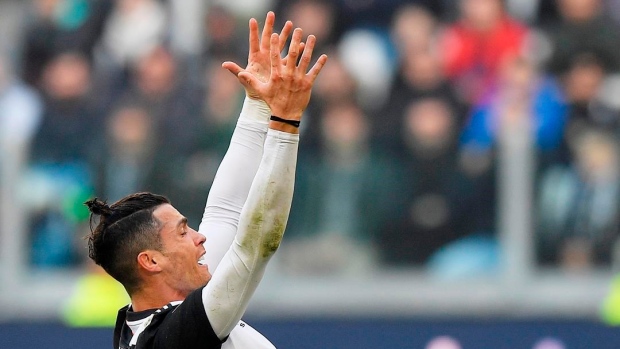 ROME — Cristiano Ronaldo converted two penalties to tie a club record by scoring for a ninth straight game as Serie A leader Juventus bounced back from a rare loss with a 3-0 victory over Fiorentina on Sunday.

The penalties came toward the end of each half as Ronaldo — who appeared bothered by a bloody cut to his ankle during the pre-match warmup — matched David Trezeguet’s streak from 2005.

Ronaldo now has 19 goals in the 19 matches he has played in this season’s Italian league — only two fewer than he scored in all of last season. In 50 Serie A matches since joining Juventus from Real Madrid before last season, he has been involved in 50 goals — 40 goals and 10 assists.

Matthijs de Ligt added another for hosts Juventus in added time by heading in a corner.

Juventus remained three points ahead of Inter Milan, which won 2-0 at Udinese. Lazio is two points further back in third — but with a game in hand — following a 5-1 rout of Spal.

Last weekend at Napoli, Juventus lost only its second match in the Italian league.

The Viola have not picked up a single point at the Allianz Stadium since the facility opened in 2011.

The first penalty was awarded after a shot from Miralem Pjanic hit the hand of Fiorentina defender Germán Pezzella. After the penalty was confirmed by VAR, Ronaldo coolly slotted a low shot inside the left post before goalkeeper Bartlomiej Dragowski could get there.

The second penalty came after Federico Ceccherini got in the way of Rodrigo Betancur, who was making his way through the Fiorentina defence. Ronaldo again sent his spot kick inside the left post while Dragowski this time leaped in the other direction.

“Juventus pays huge salaries. They don’t need extra help,” Commisso added. “I am disgusted by what I saw today, but also last week with Genoa and then against Inter.”

Juventus vice chairman Pavel Nedved responded by saying “we are seeing too much of this narrative against Juventus, suggesting that Juventus does not deserve its victories.

“We are fed up with this sort of thing,” Nedved added. "It’s time for people to stop relying on alibis when they play against Juve. We win games because we play well.”

Juventus goalkeeper Wojciech Szczesny was exceptional early on to deny Fiorentina as the visitors threatened with several chances against their hated rival.

Romelu Lukaku scored twice as Inter ended a run of three straight draws with a 2-0 victory at Udinese.

Lukaku broke the deadlock shortly after the hour mark by shooting through the legs of defender Bram Nuytinck then converted a penalty after a foul on Alexis Sanchez.

Lukaku now has 16 goals in 22 matches since transferring from Manchester United.

With Samir Handanovic out with an injured hand, Inter’s reserve goalkeeper Daniele Padelli did well to palm a shot from Rodrigo Del Paul over the bar in the first half

Ciro Immobile and Felipe Caicedo each scored braces in Lazio’s 5-1 rout of Spal, which dropped into last place. Lazio forward Bobby Adekanye also got on the scoresheet with his first Serie A goal.

Immobile has 25 goals and no player in league history has scored more through 21 matches — with Antonio Valentin Angelillo also having had 25 at this point in 1959 for Inter.

Atalanta was held to a 2-2 draw at home by Genoa, which began the day in last place, but still moved ahead of Roma into fourth place and the final Champions League spot. A late equalizer from Josip Ilicic secured Atalanta the point.

Meanwhile, eighth-place AC Milan was held to a 1-1 draw by Hellas Verona as Zlatan Ibrahimovic was held out due to sickness. After Davide Faraoni’s opener for Verona, Hakan Çalhanoglu replied for Milan with a free kick that deflected in off Verona’s wall. Verona played the final 22 minutes with 10 men after Sofyan Amrabat was shown a direct red for coming down on Samu Castillejo’s leg.

In stoppage time, Daniel Maldini made his first-team debut for Milan, extending a club family dynasty started by grandfather Cesare and dad Paolo.

Also, Lecce moved out of the drop zone with a 4-0 win over Torino, leaving coach Walter Mazzarri at risk after a 7-0 loss to Atalanta in Torino’s previous match.