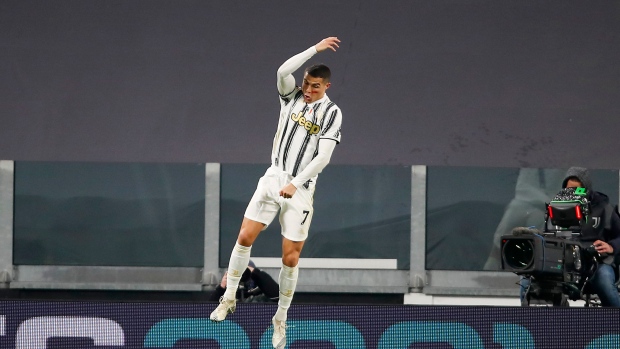 MILAN — Cristiano Ronaldo continued his scoring streak with another two goals as Juventus won 2-0 against Cagliari to move second in Serie A on Saturday.

“When you have a champion like Ronaldo you can achieve any result, he is an example for everyone and he only has to continue like this,” Juventus coach Andrea Pirlo said.

Juventus moved a point below league leader AC Milan, which visits Napoli on Sunday. Third-place Sassuolo is a point further back ahead of its match against Hellas Verona.

“It was important for our growth to have a match like this,” Pirlo said. “We played well from the first minute and dominated the match.”

Atalanta and Lazio are among four clubs on 14 points, three fewer than Milan. Lazio won 2-0 at Crotone earlier Saturday and Atalanta was surprisingly held 0-0 at Spezia.

Juventus attacked from the start and Federico Bernardeschi thought he had given his side an early lead but it was ruled out as Álvaro Morata was offside in the buildup.

The hosts finally made the pressure count seven minutes before the interval when Morata found Ronaldo, who cut in from the left and fired into the far bottom corner.

Ronaldo doubled his tally four minutes later after a corner was flicked onto him by Merih Demiral.

Juventus had chances to extend its advantage in the second half, notably when Demiral headed off the crossbar.

Ciro Immobile marked his recovery from the coronavirus with a goal to send Lazio on its way to victory at last-place Crotone.

Lazio's match was at risk of being postponed after torrential downpours and flash flooding in the area. But it went ahead despite the ball barely rolling and water splashing up from the waterlogged pitch as the players ran.

It was Immobile’s first match in nearly three weeks after being ruled out with COVID-19, which also kept him out of Italy’s three matches.

Immobile had scored in his previous three matches before his layoff and he opened the scoring in the 21st minute with a diving header into the bottom left corner following a superb cross from Marco Parolo.

Correa doubled Lazio’s lead in the 58th with a shot from a tight angle after dribbling past Crotone defender Pedro Pereira and going almost to the byline.

Atalanta and Spezia both struggled in a match of few chances.

Spezia had won only one of its last five matches but almost took a surprise lead within the first two minutes when Diego Farias' curled effort smacked off the far post.

Atalanta also hit the woodwork at the end of the first half through Duvan Zapata.

The visitors almost won the match late on but Spezia goalkeeper Ivan Provedel pulled off a stunning double save to deny first Mario Pašalic and then Robin Gosens.