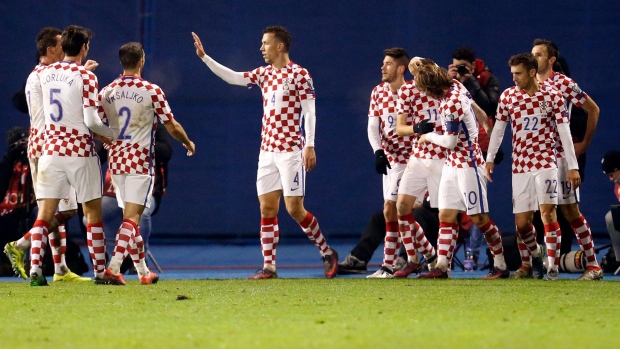 ZAGREB, Croatia — Croatia didn't have any fans in its national stadium, but it didn't need their support as two Marcelo Brozovic goals brought a 2-0 win over Iceland, opening up a two-point lead at the top of European Group I in World Cup qualifying on Saturday.

Forced to play in an empty arena because of numerous cases of spectator unrest, Croatia took the lead early when Brozovic curled in a shot from outside the box.

Croatia dominated the rest of the game but struggled to find a second goal in the face of stubborn Icelandic defending, though the Croatians largely dealt well with counterattacks that caused so many problems for top teams at the European Championship.

Brozovic wrapped up the game in stoppage time, picking up the ball on the halfway line and charging up the field before smashing the ball past Iceland goalkeeper Hannes Halldorsson.

Ivan Perisic came closest to scoring another for the hosts, but sent one shot straight at Halldorsson, and sliced another narrowly wide. Perisic's night went from bad to worse with a red card shortly after Brozovic's second goal after he sliced down Birkir Bjarnason with a reckless two-footed challenge.

In recent years, Croatia has been given increasingly heavy sanctions for fan unrest including fighting in the stands and flare use at the European Championship, as well as the drawing of a swastika on the pitch ahead of a game against Italy last year.

Croatia moved to 10 points at the top of Group I, with Ukraine in second on eight, and Iceland a point further behind.

Also in Group I:

Ukraine leapfrogged Iceland into second place with an unconvincing win over wasteful Finland in Odesa.

Artyom Kravets, his head heavily bandaged following a collision, scored the winning goal in the 24th, shedding his marker and sneaking in at the far post to meet Yevhen Konoplyanka's cross from the left flank.

Finland put up stiff resistance, however, with goalkeeper Lukas Hradecky stopping several promising Ukrainian efforts. At the other end, sloppy defending allowed Finland some gilt-edged chances, but they were wasted under pressure.

Oleksandr Kucher's poor backpass put Teemu Pukki one-on-one with Ukraine goalkeeper Andriy Pyatov, who got down low to save. In the 65th another chance went begging as Eero Markkanen somehow fired over from point-blank range. Defeat left the Finns fifth on one point, with hopes of reaching their first World Cup fading fast.

Kosovo's difficult start to its first major qualifying competition continued with defeat away to Turkey, but there were signs of progress.

Improving on the 6-1 loss to Turkey in a 2014 friendly, Kosovo kept the Turks at bay throughout the first half, but conceded two goals in quick succession from Burak Yilmaz and Volkan Sen shortly after the break. Turkey is fourth in the group, while Kosovo is sixth and last with only a single point.