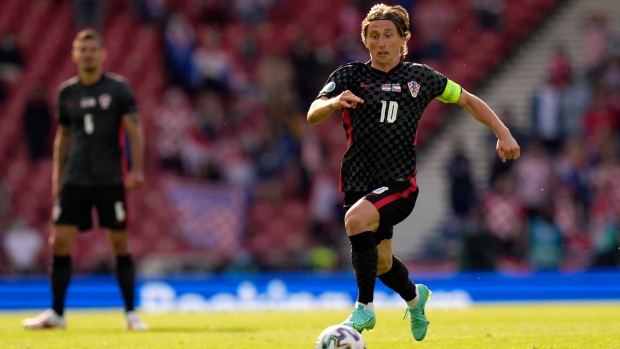 The stakes are pretty easy to understand for both Scotland and Croatia heading into their final Group D match on Tuesday at Glasgow’s Hampden Park: Win and you’re very likely headed to the Round of 16. Anything short of that and your Euro 2020 campaign is over.

Steve Clarke’s team heads into Tuesday’s match buoyed by a dogged performance against England in a scoreless draw on Friday that earned the Tartan Army their first point of the tournament, but the man who was the best player on the pitch that afternoon at Wembley won’t be available for Scotland on Tuesday. Billy Gilmour is out of the squad after the Chelsea midfielder tested positive for COVID-19.

“It’s disappointing for Billy more than anyone else,” Clarke said. “We have enough players in the squad to react and that’s what we will do and we’ll get ready for the game.”

One easy solution for Clarke would be to move Manchester United’s Scott McTominay forward from the backline and into the midfield where he normally plays for the Red Devils. Whatever adjustment Clarke decides to make, Croatia midfielder Ivan Perisic believes that it will be something for his team to contend with along with the raucous atmosphere inside of Hampden Park.

"Scotland have a replacement for Gilmour and they will be ready for us,” the Inter man said. “They are playing in front of their fans and they will give their best. However, everything is on us and a lot will depend on what we do."

A Premier League and Champions League winner with Liverpool, Scotland captain Andy Robertson says that Tuesday’s match will be among the most important of his life.

"Obviously, it's right up there with the big games that I've played,” Robertson said. “The feeling I get to captain the country, captain these boys, is very difficult to explain, and I've enjoyed every minute of it, and I'm sure all the boys have as well. That's why we want to keep it going as long as we can."

Clarke believes the stakes involved in the match could make for a very interesting tactical battle in an all-or-nothing scenario.

“I think for both teams it’s going to be a case of trying to work your way into the game,” Clarke said. “It’s a difficult game to read to be honest because both teams need to win. It might become very open at one stage if both teams are chasing a goal. Tactically it’s going to be very interesting.”

Historically, Scotland is undefeated against Croatia, winning twice and drawing three matches, but it’s hard to reach any conclusions from that record when the history is not exactly recent. The two teams have not played since being drawn into the same qualifying group for World Cup 2014. Scotland claimed a pair of victories over Croatia in 2013 – a 1-0 win in Zagreb in June and then a 2-0 victory in the return fixture that fall in Glasgow.