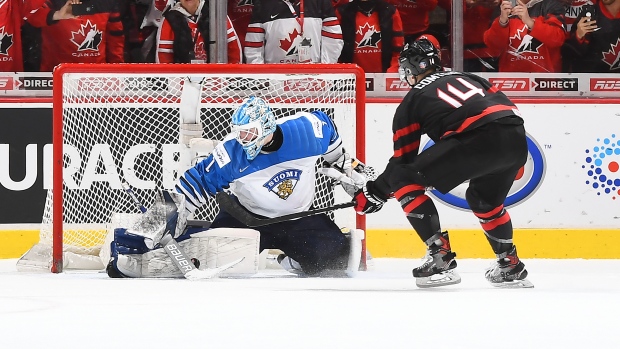 Comtois was hit with criticism after failing to score on a penalty shot in overtime on Wednesday, with the agency that represents him calling the social media response "shameful and incomprehensible" in a statement on Thursday.

“I feel bad. That’s immediately what I thought of when I saw the penalty shot and just the amount of pressure that’s on a young kid," Crosby said Friday. "It’s too bad that people have to react that way and with social media it kind of gives them that opportunity.

“My advice to him would be just to ignore it. He’s a great player and he’s going to have a great career and that’s not going to define who he is – that penalty shot. The real fans and the people that are behind you, I think everybody is there to support him. Anything can happen in hockey and in a quarter-final game like that. You see the stick break – it’s one of those things.

“It’s easy to be a good fan when you’re winning, but it’s a little tougher when you lose and I think everyone should keep that in mind.”

Crosby played for Canada at the 2004 and 2005 World Junior tournaments, winning silver as a 17-year-old and then gold the next year. He is a rare member of Hockey's triple gold club with an Olympic gold medal (two), a world hockey championship and a Stanley Cup (three) to his name.

Wednesday's loss represented the first time Canada failed to medal at the tournament on home soil, though it was their second quarter-final exit in four years.

The Roy Sports Group, which represents Comtois, said in their statement the 19-year-old wanted to use the backlash as a learning moment for young Canadians.

"It is shameful and incomprehensible that a few cowards who can hide behind social media could make such vicious attacks on these young men's character after they have battled their hearts out for their country," the statement reads.

"We will make this one and only statement on this subject, so not to validate anymore the cowardly comments made on social media. It was Maxime’s idea to use this as a learning moment for all of the youth of Canada, that cyber bullying is a real problem, and like all bullies, we all need to stand up to them and call them out for what they are. Thank you for shedding a spotlight on a major problem in our society."