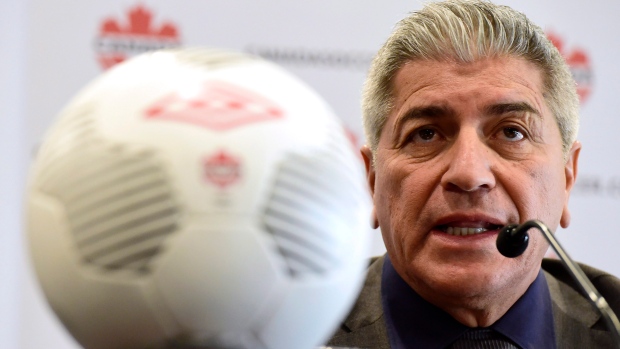 TORONTO — The Canadian men's program is taking a page from its women's counterpart with the hiring of Octavio Zambrano.

Just as John Herdman is clearly in charge of the Canadian women, no matter their age, Zambrano will run the men's side of the game, from under-15 to the senior side.

"First and foremost, we thought it was important even before we selected Octavio that we change the structure of the program so that there was uniformity and that there was one voice," said Victor Montagliani, president of the Canadian Soccer Association. "I think too often we have too many voices in Canadian soccer. And I think it's important to have one voice."

"(Zambrano) will be in charge of the program, right through and through ... He's the voice in the program," Montagliani added.

Montagliani says the CSA will continue to have age-group coaches for the U-15, U-17 and U-20 teams but was clear about who's the boss. "They'll all come under his tutelage, under his philosophy."

Zambrano, whose title is head coach of the Canadian men's national team program, has already elected to take charge of a Canadian under-23 squad at a tournament in Qatar later this month.

There is no word yet on whether there will be a U-23 coach or whether Zambrano will continue to handle that squad.

On the women's side, Herdman doubles as national team head coach and director of the women's EXCEL program — the pipeline that funnels young talent up the ranks under the watchful eye of hand-picked coaches.

In Herdman's words: "Consistent world-class on the performance on the highest stage is reliant on a development system that everybody in soccer believes in and contributes to."

The CSA has tried to entrust one man with the keys to the kingdom before. Holger Osieck, who was both head coach and technical director, led Canada to the Gold Cup but struggled getting others to join his off-field crusade.

Changes in governance across the country and at the CSA should help Zambrano's cause.

Jason deVos, the former national team captain who is the CSA's director of development, will be an important part of the puzzle. While his brief primarily covers the grassroots, it also involves a degree of high performance.

Zambrano shared some of his beliefs Friday, such as having his players do their fitness work with the ball.

And he sent a warning about how his players better wear their hearts on their sleeve.

"Passion, if you don't have it, if you don't have that fire inside that takes you to make that extra move to really put your body and yourself in harm's way to accomplish something that is huge, that is important for this country, then you probably won't be part of this program" said Zambrano. "Because those are the kind of guys we'll be looking for."

"I think Octavio will certainly try to score goals and score lots of them. And do that in a nice style to watch as well," he added.

Zambrano is also on board with Montagliani on the need for a domestic league to provide more playing options for Canadian talent.