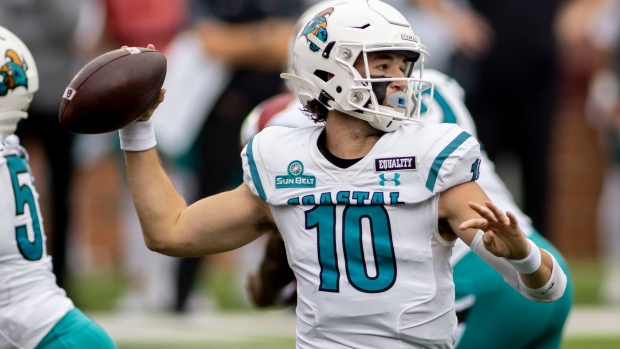 What a season it’s been for Coastal Carolina, who is in just its fifth season in the Division I Football Bowl Subdivision, the top level of college football.

Impressively, Coastal is tied with No. 1 Alabama for the best record in college football (11-0) in a season that was ravaged by interruptions caused by the COVID-19 pandemic. As a result of their strong play this season, the Chanticleers (SHON-ti-clears) enter the Cure Bowl ranked 12th in the College Football Playoff rankings and ninth in the Associated Press poll.

Coastal Carolina, who plays in the often-overlooked Sun Belt Conference, had their most impressive win this season against a well-regarded school, BYU, on short notice after, ironically, Coastal was unable to play Liberty because the Flames reported COVID-19 issues close to date of the game.

After not getting much respect from the College Football Playoff committee, Coastal Carolina now sets its sights on winning its first-ever Bowl game appearance as it takes on Liberty in the FBC Mortgage Cure Bowl in Orlando on Boxing Day.

Liberty (9-1) finished this season with the best record the history of their program and they’ll look to capture their second consecutive bowl win.

Canadians will be well acquainted with the Flames’ offensive coordinator, as he’s none other than former CFL player and coach, Kent Austin.

Here’s what you need to know about the matchup:

Coastal Carolina: Canadian LB Enock Makonzo (Lachine, Que.) is third on the team in tackles (66) and also has two sacks. His two forced fumbles are the second-most of any Coastal defender. Quarterback Grayson McCall is a dual-threat, passing for 2,170 yards and 23 touchdowns versus just two interceptions, while also checking in as the team’s second-leading rusher with 473 yards and six touchdowns.

Liberty: Canadian offensive lineman John Kourtis, who serves as the team’s backup centre. Dual-threat Quarterback Malik Willis has passed for 2,040 and 20 touchdowns this season against just four interceptions, and is also the team’s leading rusher with 807 yards and 10 touchdowns.