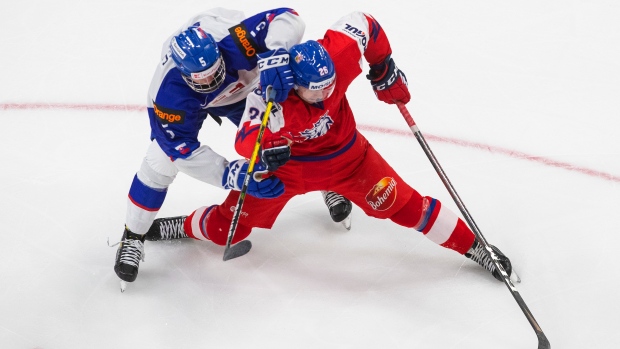 The IIHF Disciplinary Panel has issued a one-game suspension to Czech Republic forward Adam Raska for boarding, it was announced Friday night.

The incident occurred in the third period of the Czech Republic's pre-tournament game against Slovakia.

The IIHF explained the ruling in a statement:

At 59:44 in the 3rd period Slovak defenceman Simon Becar recovered a pass from his teammate behind his own net and passed it further on his backhand around the corner. The passing action caused Becar to lose his balance which forced him to go down on one knee.

Immediately after Becar passed the puck, and while Becar was in the kneeling position, Raska skated towards Becar at high speed and initiated contact with his right shoulder which projected Becar heavily into the boards, right shoulder and head-first. Becar fell to the ice but was able to get up by himself and leave the ice.

Based on all facts ascertained, the Disciplinary Panel determined that because Raska was aware of Becar’s vulnerable position with respect to the boards when he checked Becar, and because Raska’s actions resulted in Becar being violently thrown into the boards, Raska’s actions were reckless and dangerous, and created a serious risk of injury to Becar, thereby violating IIHF Official Rule 119-Boarding. The Player is always responsible for the checks he makes.