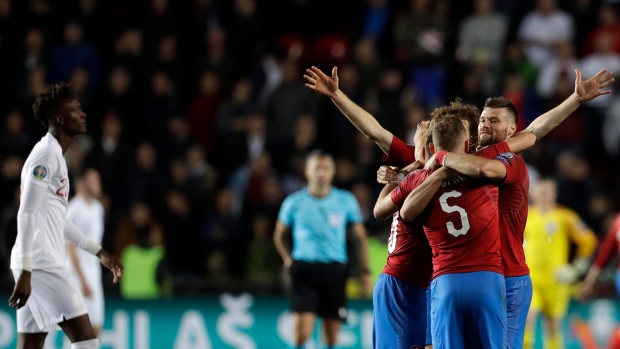 PRAGUE, Czech Republic — England lost a World Cup or European Championship qualifier for the first time in 10 years on Friday as FC Dallas forward Zdenek Ondrasek scored in his international debut for the Czech Republic.

Substitute Ondrasek helped to rally the Czechs to a 2-1 win over England in their Group A qualifier for Euro 2020.

It was the first victory for the Czech Republic over England since Czechoslovakia split in 1993. Czechoslovakia last beat England 2-1 in 1975 in a qualifying game for the following year's European Championship which Czechoslovakia went on to win.

"It's unbelievable," the 30-year-old Ondrasek said. "I'm happy to get a chance (to play) and that I used it. It's a very important victory and I'm grateful for it. It was the hard work from the entire team."

Five minutes from time, Lukas Masopust advanced down the right before crossing for Ondrasek to score the winner with a low right-footed shot.

England had won all its four previous games in the group with 19 goals scored.

England and the Czech Republic top the group with 12 points but England has one game in hand.

Kosovo is four points back in third, while Group A strugglers Bulgaria and Montenegro drew 0-0.

England last lost a qualifying game for a major tournament on Oct 10, 2009, a 1-0 away loss to Ukraine in a 2010 World Cup qualifier. That loss came with England already qualified for the tournament. Its last meaningful defeat in qualifying was against Croatia in 2007.

"We didn't play well enough, simple as that," England coach Gareth Southgate said. "We conceded possession of the ball too cheaply., Particularly in the first half, we didn't create enough chances, the second half, we had some good chances that we didn't take and throughout the night we were too open out of possession. That was because of giving the ball away. We gave (the Czechs) too many opportunities to score."

Amid early dominance of the visitors, captain Harry Kane put England ahead in the fifth minute from the penalty spot after Raheem Sterling was tripped by Masopust.

It was Kane's seventh goal of the campaign, taking his international tally to 27.

The Czechs were thrashed 5-0 by England at the start of qualifying at Wembley Stadium in March but looked more ready this time to cope with England's speed and skill.

They were back in the game just four minutes after the opening goal when Ondrej Celustka directed Jakub Jankto's corner kick to Jakub Brabec and the defender unmarked at the far post equalized.

Ross Barkley and Marcus Rashford came on as substitutes in the second half to replace Mason Mount and Jadon Sancho but failed to make a difference.

"There's a lot of work to be done to be a really top team," Southgate said. "Tonight was a clear evidence of that."

In the second half, Czech goalkeeper Tomas Vaclik denied both Sterling and Kane one-on-one.