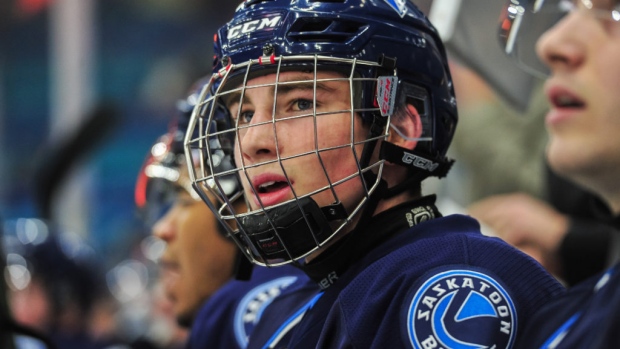 Hunter elevated Dach, the third overall pick in June’s draft, to the top unit after the Chicago Blackhawks prospect made a beautiful, backhand, no-look pass to set up Veleno for the ice breaker on the power play.

"It was a sick pass," said Veleno, a Detroit Red Wings first round pick in 2018. "He's a hell of a player. I haven't seen him play too much out West, but going third overall, you know, you got to have something … he's a real special player."

"They were clicking on the power play so I thought I'd get Dach in the middle between them," Hunter explained.

Kirby Dach makes a beautiful pass to Joe Veleno, who opens the scoring at 1-0. #WJSS pic.twitter.com/mfLwgPt7Nl

The trio combined on a pretty tic-tac-toe play off the rush on the second Canadian goal with Lafreniere’s subtle drop pass to Veleno raising eyebrows in the press box and among those in the crowd, which included Ottawa Senators general manager Pierre Dorion.

"It was a pretty underrated play," Veleno noted. "I don't think too many people saw that little pass, but on the ice you see it and it’s pretty nice."

"I saw Joe before and I knew he was behind me,” said Lafreniere, projected to go first overall in the next NHL draft, nonchalantly. "That was a real nice goal and it's a line effort."

"He sees the ice and he knows where the players are," said Hunter, "and when players have that, that’s hard to defend … he just has the feel that he knows where the guy is and it makes a big difference and all the good players in the National Hockey League have it."

Lafreniere didn't get an assist based on the announcement, but should. Excellent touch pass in space to Veleno to allow Dach the time to sneak back door. https://t.co/9EQMcF89Z2

Veleno and Lafreniere made Canada's World Junior team as under-agers last year and Dach, who finished the night with two goals and an assist, is looking to follow in their footsteps.

"He’s really smart, always at a good spot on the ice and he’s easy to play with. He wins every battle and does everything the right way," said Lafreniere. "He's so big and he's so fast at the same time, it’s unreal."

"It's huge for me," said Dach, who stands six-foot-four, when asked about his skating ability. "The game has gotten so much faster now and you see so many smaller guys step into the league and they're elite players and for a bigger guy, it's tougher for us to move around the ice, but I've worked on skating for a while to kind of take my game to the next level and that's helped me out a lot."

The hockey IQ of all three players was evident in their first game together, which came in the middle of the summer.

Cole Caufield scored the only goal for the Americans on Tuesday and it was a vintage Caufield snipe.

"That's why he's lit it up pretty good," Hunter said breaking into a big smile. "I imagine Montreal was pretty happy with that shot."

Caufield didn't seem to have much space over the shoulder of six-foot-four Peterborough goalie Hunter Jones, but has proven time and time again he doesn't need much space to make magic.

"The guy gave me a little room so I decided to take advantage of it," he said. "I kind of know where I'm going to shoot based on where I am on the ice. You can kind of guess where the goalie's going to be before you even get the puck. It's all just preparation and knowing where you're going to put it  before you get it."

You just can't give Cole Caufield that kind of room from the dot. He snipes one top shelf to make it a 2-1 game. Wow. #WJSS #GoHabsGo #NTDP pic.twitter.com/umbtat6Uo7

"I’d probably say my snapshot," the Montreal Canadiens’ first round pick, 15th overall, said. "I can score in many different ways – the slap shot, a little one-T – ​but I just think my quick release helps me with the snapshot. It just gets off your stick a little bit quicker, surprises the goalie, the goalie can’t pick it up as fast and he doesn’t know where it’s going to go off the stick. So, any way I can cheat the goalie, get it off faster or hide the puck from the goalie, I just keep trying to learn and find ways to grow."

That makes sense to Team USA linemate Alex Turcotte, who is also off to the University of Wisconsin this fall.

"His snapshot, honestly," said Turcotte, a Los Angeles Kings prospect, when asked about Caufield's best weapon. "It catches everyone off guard. He scored 72 last year and a lot of them were off snapshots."

Caufield credits teammate Spencer Knight, the top netminder picked in June's draft (13th overall to the Florida Panthers), for helping him better understand the mind of a goalie.

"I roomed with him a lot this past year so I got to pick up some little things that were big for me," he revealed. "What I’ve learned most from him is that the other guys on the ice distract him so the more you can look off and distract him the better chance you have in just surprising the goalie."

Former NHL goalie John Vanbiesbrouck​, now GM of Team USA, likes what he sees from the sniper so far at the summer camp.

"What’s impressed me about Cole is obviously his release and getting the shot through, that’s what pros do," Vanbiesbrouck said​. "They don’t get their shot deflected very much. He rarely gets it deflected. He’ll miss. He’ll shank some shots, but he very rarely gets it deflected or blocked. I think every goalie’s going to have to pay attention to him when he’s on the ice. If you’re not watching where he is, it’s going to be trouble for you."

The diminutive winger has studied NHLers to hone his craft and become even more explosive. Who's his favourite guy to watch?

"Alex DeBrincat is someone I try and model my game after," Caufield said of the Blackhawks winger who also stands just five-foot-seven. "The way he does it at the highest level is something that really stands out to me, just being like him, a similar stature. He just completes and doesn’t quit on pucks and that’s what I like most about him."

"Mitch Marner and Auston Matthews," he said, referencing the American centre whose NTDP team goals record of 55 he obliterated this season. "They really know where to be and where to put themselves. They don’t always have to pick a spot and get there. They can be in the right spot and just rip it past the goalie. So, there’s a bunch of different ways to score."

"I've just read stuff about his character in the room," the 18-year-old explained, "and how good he is on both sides of the puck. I mean, he logs a lot of minutes so I think I have similar characteristics to that so I like to think I'm somewhat like him."

Although TSN director of scouting ​Craig Button sees Byram as being more in the mould of Blackhawk Duncan Keith, providing offence with an edge.

"I definitely think we have a similar compete level," Byram agreed, "so I definitely see myself as similar to him as well."

With Canada's three potential returnees on defence – Ty Smith (Spokane, NJD), Noah Dobson (Rouyn-Noranda, NYI) and Jared McIsaac (Halifax, DET) – all unable to participate on the ice this week, Byram is in the spotlight. But the fourth overall pick in last June's draft is hoping he'll be with the Colorado Avalanche and not​ in the Czech Republic come December.

"If you're not going to camp with the attitude that you’re going to make the team, then you might as well not show up," he said. "That's what it’s all about. I want to go in there and play in the NHL so that’s my goal, for sure."

That said, Byram insists he'll be extremely motivated should he return to the WHL for another season.

"Yeah, for sure," he said when asked if he had anything left to prove in junior hockey. "I want to win a championship wherever I am."

He came close last year losing in overtime of Game 7 in the league championship series against Prince Albert. Byram ended up leading the WHL playoffs in scoring with 26 points. Combine that with his record six overtime winners in the regular season and Byram is becoming known as a clutch contributor.

"I managed to play my best hockey down the stretch in the playoffs and I think that showed on the points sheet, but also with how far our team went," he said.

Jett Woo broke out offensively last season posting 66 points in 62 games with Moose Jaw. The defenceman had recorded 47 points in his first two seasons in the WHL (109 games). So, what changed?

"The biggest thing is just my confidence," the Canucks prospect said. "This year was my first time being consistently on the power play and the penalty kill and being one of the go-to guys ... and, obviously, growing and being an 18-year-old guy, more of a leader last year as well, is something I used to my advantage."

But the Winnipeg native still prides himself as being a defensively sound player.

Woo, who missed Canada's practice on Tuesday due to a minor injury, still sees lots of room for him to grow.

"For me to get to the next level everything about my game has got to be better," he said. "Obviously, I want to get quicker, faster and smarter as I go up and a lot of those things go with the reps."