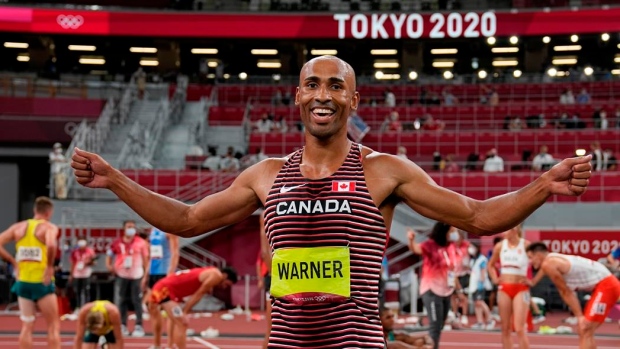 Damian Warner won gold in one of track and field's most gruelling events, masterfully laying down one terrific performance after another over 10 events and two days, in the smothering Tokyo heat.

But Warner's story is about much more than his Olympic victory.

In an unforgettable year jam-packed with tales of resilience, Warner's was one of the most remarkable. And the golden ending meant that much more for the gargantuan challenges he and his team hurdled get there.

"Obviously, winning the gold medal is going to be thing that stands out the most, just because I've been chasing it for the longest period of time," Warner said. "But what I'm most proud of is how we persevered through the situation that we had, because it wasn't ideal, and it was tough, but we found a way to work around it, while also being at our best.

"So, knowing how the journey was leading up to the Games, makes everything that's happened that much more special."

The 32-year-old from London, Ont., captured Canada's first Olympic decathlon title in emphatic fashion. He set an Olympic record and a Canadian record, and became just the fourth man in history to top the elusive 9,000-point barrier.

He capped his year Wednesday by winning the Lionel Conacher Award as The Canadian Press male athlete of the year.

Warner's year was the stuff of Hollywood movies. COVID-19 closures forced him to train in an otherwise empty, rundown hockey arena in London. He'd warm his hands over space heaters, but his fingers and toes would inevitably go numb. A 40-metre strip of track his coaches had glued down was as far as he could run.

"We were pole vaulting and I was getting really frustrated . . . it seemed like everything was just too much," he said.

He told coaches Gar Leyshon and Dennis Nielsen that it was a waste of time, it wasn't gold-medal training.

The Conacher race was a close one with Warner receiving 18 of the 47 votes cast by sports editors, writers and broadcasters across Canada. Sprinter Andre De Grasse was second with 14, while soccer's Alphonso Davies, who won the award in 2020, had seven votes to finish third.

"Accepting awards like this is weird to me, because it is like a coin flip essentially," Warner said. "Andre won a gold medal, and Alfonso is having an incredible year. So, when you're picked, you kind of feel guilty to a certain extent. It's a good problem to have in Canada that we have so many athletes, and not only us three but the list goes on and on and on of people that were really successful this year. As a sports fan, that's always a cool thing to see."

"So, it's always a humbling thing and I'm grateful to be recognize, (but) it's also recognizing my family, my coaches and everybody that helped me get to this point, which is what I think is really cool about it," he added.

Warner finally turned the corner on the gloomy winter when his son Theo was born on March 11. Because he was born by C-section, it was tough for Cotten, a former world class track athlete, to climb in and out of their bed for feeding. So they moved down to their living room for two weeks. They had the Netflix show "Superstore" on a "loop, like 24/7," because the characters were "bright and loud and energetic."

Two months later, Warner stepped onto the track for his first decathlon in 20 months, and shattered his own Canadian record to win the prestigious Hypo-Meeting in Gotzis, Austria.

Turns out, he was just getting going.

"Damian Warner did what no other Canadian Olympian has ever done by winning the decathlon," said Kevin Martel, anchor at 980 CJME Regina. "It's widely regarded as the most complete medal at the Olympics, since you have to excel in so many different events."

Warner's final score of 9,018 in Tokyo was an Olympic record. He won by almost 300 points. His long jump alone would have won him bronze in the Olympic long jump event. His 100-metre time of 10.12 seconds would have almost got him into the open 100 final. Had he run the open 100, he would have been the second fastest Canadian behind De Grasse.

“Damian Warner had to train under difficult situations for 10 events," said Globe and Mail sports layout editor Phil King. "At the Olympics, he rightly won the title of the world's greatest athlete. He deserves every accolade The Canadian Press can give him and more. He is the cream of the crop — in the world."

Tennis player Leylah Fernandez won the Bobbie Rosenfeld Award as CP's top female athlete on Tuesday. The team of the year will be unveiled Thursday.

This report by The Canadian Press was first published Dec. 29, 2021.